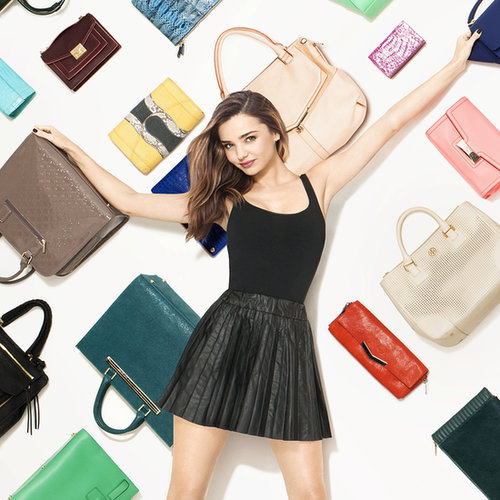 Miranda Kerr is a busy lady. The Australian beauty clocks in as one of the top one percent of models in addition to directing her own skincare line, KORA Organics, and mothering an adorable two-year-old son.

As announced on Dec. 12, the perennial fresh face now has one more credit to add to her long list, as the face of ShopStyle’s first ever ad campaign. The print, TV, digital and outdoor ads launch this week – the first images of her two year contract. Peter Glanz directed the TV ads; Terry Richardson shot the print, which, so far, feature Kerr clad in all black, saucily posed as handbags rain down around her.

Brian Sugar, CEO of online media network PopSugar, which owns ShopStyle, said Kerr was chosen for her dichotomous image of sexy and relatable. Since the age of 13 when her friend entered her into a modeling competition – and she won – Kerr has developed a reputation as a model-of-all-trades. Her rise to fame undoubtedly owes tribute to her debut as a Victoria’s Secret Angel in 2007, which was followed with campaigns for Jil Sander, Prada, Mango, Maybelline and a lookbook for Rag & Bone’s DIY project shot by her then-husband Orlando Bloom (the couple separated in October).

ShopStyle’s $25 million campaign will run in People, WWD and US Weekly along with its newly penned slogan, “We Search, We Find, We ShopStyle.” Essentially, the site is a fashion search engine, letting shoppers type in broad desires, such as “black tote,” and presenting them with myriads of results gathered from online stores across the web. It’s the Google of fashion.

As the campaign unfolds, we’re looking forward to seeing Kerr’s dog Frankie, who supposedly made his way in front of Richardson’s lens, as well. Something about a mom and a dog feels slightly domestic; and isn’t that what online shopping is all about?