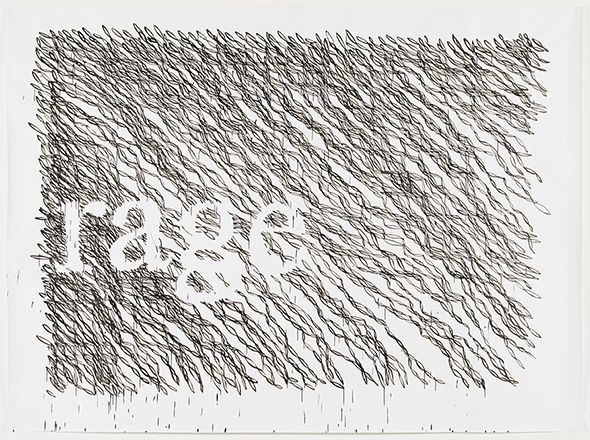 Johann König, Berlin is pleased to present Monica Bonvicini‘s ‘Disegni’ – the artist’s first solo exhibition at the gallery – over the coming Gallery Weekend. An extensive body of works from the last thirteen years is being shown for the first time in Berlin. They afford an insight into the artist’s complex, multifarious production of textual images, cut-outs, assemblages and drawings – works which have both emerged as an accompaniment to her installation output and have been created as independent productions in their own right.

The exhibition title evokes first of all associations with the universal geniuses of the Renaissance, with ‘disegno’ as both drawing and blue-print, source of inspiration and work-plan, for all-round artists-cum-architects. Above all, however, what are deployed in Bonvicini’s referential games are the experimental techniques of the artistic and literary (neo-)avant-gardes of the past century – for instance the collage as montage principle. The sheets on display reveal that here is an artist who systematically employs drawing as a conceptual medium.

With its rich-colour tempera strokes and correction tape, the triptych ‘Untitled (Harness)’ (2006) shows body harnesses from Bonvicini’s hanging installation ‘Identify Protection’ (2006), the pitch-black tempera seen oozing from the arrester loop eyelet in the hip and stomach area accentuating the SM connotations. Black is also the colour of the organic-seeming daubs in the 60“ series, which offers a fresh take on Lawrence Weiner’s gesture in his ‘Two minutes of spray paint directly upon the floor from a standard aerosol spray can’ (1968). Bonvicini’s experimental order refers to the chassis paint colours of the eponymous car manufacturers (e.g.  60“ Ford, 60“ Fiat, 60“ BMW).

Tempera and spray paint are also the constituents of the large-scale, hovering detached house facades in ‘Hurricanes and Other Catastrophes’ (2007), works created on the basis of photos taken by the artist in New Orleans in the aftermath of Hurricane Katrina. In ‘Off the Grid’ (2011-2012), diagonal wavy lines criss-cross the large-format work in a manner that takes the title at its word – they counteract the grid as a trope of modernism.

Bonvicini’s strategy of the fetishistic inversion of all male-connoted work-tools from (the construction) industry expresses itself above all in language games with props derived from the day-to-day culture of late-capitalist, post-industrial societies. In some series, the slogans and theorems of architects are alienated by word collages of the artist’s own creation. In ‘Architecture is…’ (2002), the artist pithily completes Bernard Tchumi’s rambling quote on the nature of architecture as ultimate erotic act. The large-format tempera drawings gathered together as Untitled (2006) portray construction workers with their work-tools. They are based on photographs acquired via a Google search under the search heading ‘construction workers’.

The medium of drawing takes on greater density through the method of montage – especially when Bonvicini adds new levels of representation which restrain and hamper customary narratives via an element of disorientation and disruption. In the series ‘Untitled (Betrayal)’ (2002), which was a working template for the stage set to Harold Pinter’s play Betrayal, bodily fragments of lovers appear like captive prisoners in the cold, grid-shapes of the scenery.

Bonvicini’s drawings combine signs in a manner that confuses and confounds formal and narrative conventions, arousing feelings of both pleasure and aversion in the beholder. One example would be the mental short-circuit caused by combining a hammer-impact drill shot through with line compactions and the pornography-born concept of a ‘Blind Shot’ in the work of that title; another would be ‘Blind Date’ (2004), where the artist brings the well-known term into association with an electric handsaw.

Alongside the shifting of conventional signifiers which can generally be ascribed to visual poetry, the prominent feature of these and other word-pictures is finally the recourse to modes of graphic design, for example the use of striking letter stencils. For the 24-part series ‘Run’ (2000) Bonvicini collected songs, primarily from the 1960s and 1970s, in whose titles the word ‘run’ appeared, and transposed her selection onto tracing paper by means of stencilling letters. The song-titles initiate a semantic play on variations which reverberates in the beholder’s mind. Alongside ‘Burn to run’, Bonvicini’s brutal version of Bruce Springsteen’s ‘Born to run’, the cheesy dead-end hopelessness of Tanya Tucker’s ‘Can’t run from yourself’ resonates all the more strongly as the visitor leaves the exhibition.

Monica Bonvicini (*1965, Venice) lives and works in Berlin. She studied at the Hochschule der Künste, Berlin and at the California Institute of the Arts, Valencia, CA. Since 2003 she has been professor of performing arts and sculpture at the Akademie der Bildenden Künste, Vienna. Her most recent solo exhibitions have beenDesire Desiese Devise at Deichtorhallen Hamburg, A BLACK HOLE OF NEEDS, HOPES AND AMBITIONS at Centro de Arte Contemporaneo de Málaga, Spain and BOTH ENDS at Kunsthalle Fridericianum, Kassel, Germany. She participated in numerous international well-known group shows, most recently at Hirschhorn Museum and Sculpture Garden, Washington; Belvedere, 21er Haus, Vienna and Museum Ludwig, Cologne, Germany. Monica Bonvicini was awarded with the Golden Lion for the best pavilion at the Venice Biennale 1999 and she was honoured with the Nationalgalerie Prize for Young Art, Berlin 2005.

THE NEW VISAGE OF SAINT LAURENT