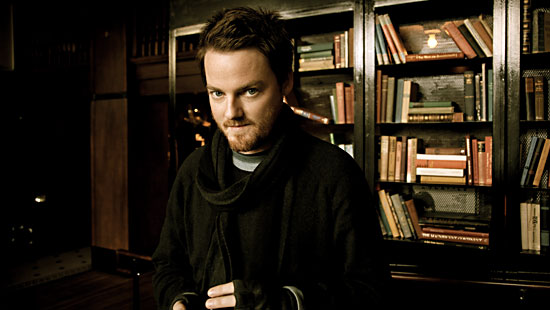 Eluvium will release the long-awaited new album, Nightmare Ending, on May 14 via Temporary Residence Ltd. SPIN released the details of the double-album, Eluvium’s first since 2010.

In his 10-year career as Eluvium, multi-instrumentalist composer Matthew Cooper has rarely stood in one creative corner for very long. From gaseous ambient epics, to baroque solo piano works, to melancholic chamber-pop, the common thread connecting all Eluvium albums is the remarkable quality control and attention to even virtually inaudible details.

Nightmare Ending is the first proper Eluvium album released since 2010’s Similes, the unexpectedly vocal-heavy ambient-pop record that simultaneously delighted and confounded longtime fans. But the Nightmare Ending story actually began years earlier, as it was intended to be the follow-up to the watershed album, Copia. Conceived as a way of helping loosen his self-imposed ideals of perfection, Cooper labeled each Nightmare Ending track as either a “dream,” or an “imperfection” – a way of differentiating the philosophical concept of “dream vs. reality,” couched in the more tangible technical distinctions of “flawless vs. flawed.” With each progressive listen those differences naturally challenged themselves, and without relying on the standardized perfection protocol, Cooper became increasingly reluctant to release any of it. He shelved it, and pursued Similes instead. But Nightmare Ending wouldn’t go away; it lingered in the back of his mind, the abandoned fruits of a truly worthwhile and noble journey towards a less creatively constraining mindset. Cooper returned to it with renewed vigor, writing and recording in a blur of time that spanned several years. The result is a body of work that encompasses everything remarkable about past Eluvium albums, executed more powerfully and poignant than ever before.

Executed with equal parts wonder and abandon, Nightmare Ending has a magical way of making tiny sounds feel overwhelmingly enveloping. For an almost entirely instrumental album, it speaks volumes about the volatility and ecstasy of Eluvium’s colorful, cathartic world.

0
The Untitled Magazine February 7, 2013
No Comments Yet