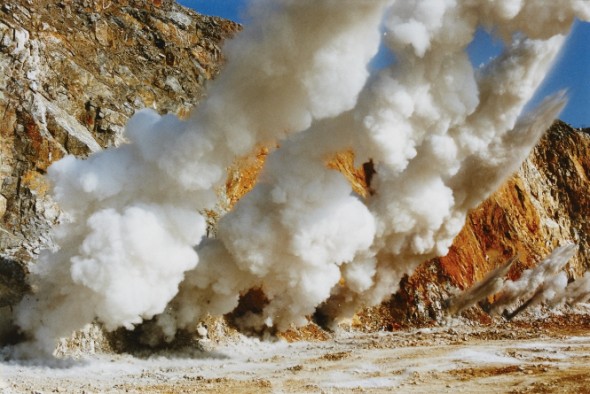 Taka Ishii Gallery is presenting“Blast,” a solo exhibition by Naoya Hatakeyama, from August 20 to September 7. “Blast” is one of Hatakeyama’s best-known series and it has been frequently exhibited in museum exhibitions. The current exhibition, however, will comprise a new selection of prints including images that will be shown publicly for the first time.

Hatakeyama began photographing “Blast” in 1995. The series was shown in the exhibition “Aspects of Contemporary Photography – another reality” held during the same year at the Kawasaki City Museum. Since then, Hatakeyama has continued to work on the series and it has been presented in numerous exhibitions in Japan and abroad. For Hatakeyama, who has created works that carefully and poetically examine nature, the cities that we have built, and the philosophies that give them form, the photographing of “Blast,” which is coordinated with an explosives expert who accurately predicts where the shrapnel from the blasted boulders will fly, has been an invaluable experience that has allowed him to reexamine photography’s appeal and the foundations of its technology.

After the Great East Japan Earthquake of March 11, 2011, Hatakeyama felt that he could no longer continue to make photographs in the way that he had in the past. His decision to take stock of the “Blast” in the current situation marks an important event requiring long-term analysis.

Hatakeyama’s video work “TWENTY-FOUR BLASTS 2011”, which was included in the large-scale solo exhibition “Natural Stories,” first held at the Tokyo Metropolitan Museum of Photography and then at the Huis Marseille in Amsterdam and San Francisco Museum of Modern Art, will be available as an editioned work in the current exhibition. This summer, Shogakukan will publish the book Blast, which compiles works from the titular series.