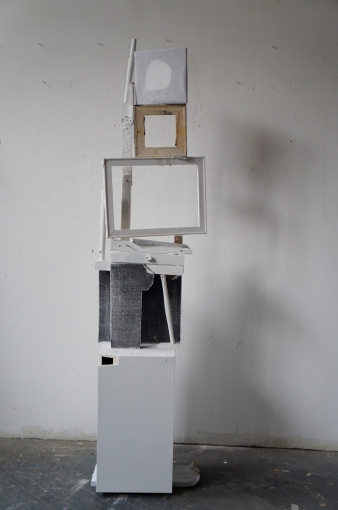 On show a selection of inedited works, appositely tailored for the Milanese space, that investigate on the relationship between the artist and her production. Nazafarin Lotfi imposes an overwhelming distance between herself and her works; she moves away from the origins of conception up to an extreme point of no return so that the remaining void can be filled in by the presence of the spectator. In spite of this attempt of detachment, an intimate relationship between the artist and her works is inevitably established. The creative act thus becomes an occasion to manifest her thoughts, instinctively expressed, without being restricted by pre-determined hierarchical orders.

The works verge towards monochromy and the color palette is reduced to an absolute minimum. The dark surfaces devour light, denying any form of visibility and concealing misleading heterogeneous elements, withdrawn from their daily use. The artist’s interest towards empty spaces and interruptions descends from her architectural academic background and represents an invitation towards the unknown: this position is emphasized by the transitivity of the adopted materials and by the selected processes of production whose functions overlap and boundaries are blurred.

If previously this process was employed for a narrative purpose, now Nazafarin Lotfi implements the inverse procedure, pushing her works to spontaneously release a story. In her new series the artist explores every trace reported on the canvas. The layers are positioned and contemporaneously rejected, leaving behind one and only ephemeral mark. The sculptures, like the paintings, are created through a mechanism of destruction and removal. In this process the composition can never be considered complete and obsessively becomes the starting point for a successive production. The image thus represents the presence of the artist’s ultimate action on the canvas.

Nazafarin Lotfi was born in 1984 in Mashad, Iran. After having obtained her bachelor at the University of Tehran in 2007, she moved to the United States where, in 2011, she achieved a Master of Fine Arts at the Chicago School of Art Institute.

Her work has been included in international exhibitions in the United States, Europe and Asia, amongst which NURTUREart Benefit at Chelsea Art Museum, NY, In Between all’Autumn Space, Chicago, IL and Faux-Cult at Noglobe, Brooklyn, NY. She lives and works in Chicago, IL.