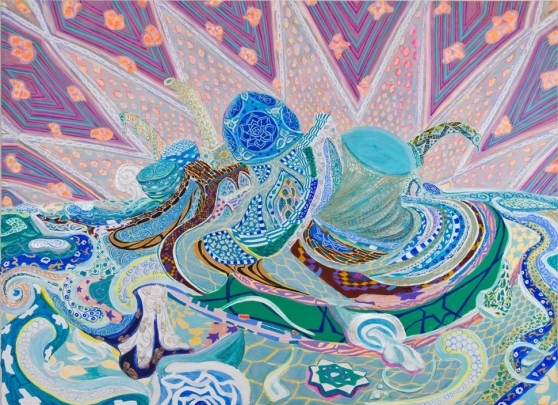 Leila Heller Gallery will be presenting The Consumption, Negar Ahkami’s second solo exhibition at the gallery, on view from June 6 – July 6, 2013. The Consumption will feature a selection of new works by Ahkami, including exuberant paintings with bas-­‐relief surfaces that depict a variety of figures in water. A fully illustrated catalogue, with an essay by art historian Jane Panetta, will accompany the exhibition.

Ahkami’s water imagery is calligraphic and patterned, inspired by Iran’s blue-­‐tiled mosques, which have been said to symbolize water and nature. The artist uses all-­‐over patterning and water symbolism expressionistically, to convey a psychic loss of control. Families under water struggle to keep children afloat. Women sink on opulent loveseats, clinging to their possessions. Female figures submerged in patterned waves appear to be in ecstasy, willingly surrendering control. In these intense yet playful works, water acts as a symbol of struggle and passion.

Emerging in Ahkami’s work is a new vocabulary of universal iconography exploring the human condition in today’s world. Her current works dialogue with monumental compositions of ancient Near Eastern rock reliefs. While in the past decade, Ahkami routinely created overtly political imagery, in 3 paintings in this exhibit, she revisits her iconography of melting Persianate cityscapes spreading cartoonishly towards the viewer. For Ahkami, this caricature of Iran’s regime, and of fears of its nuclear threat, is a product of consumption “of media images that have distorted the view of Iran from a distance”. Her recent returns to this theme are spectacles of pattern that shift between entrancing and cartoonish, with more fascination than angst.

Persian art influences continue to predominate in Ahkami’s new work. Her paintings’ relief-­‐like textures, and glazes of deep blues and pearlescent whites, borrow from Iran’s lusterware and molded-­‐relief ceramics. For Ahkami, the dynamic textures of these sources, and the obsessive, hand-­‐made quality of the patterning, “carry the potential for a Persian-­‐Islamic art that can be as emotive and personal as the exaggerated gestures and drips of Western expressionism.” Ahkami similarly exploits the expressive potential of complex pattern juxtapositions in Iranian art and architecture. Her depictions of figures in a cacophony of rhythmic pattern evoke their powerlessness against greater forces.

Other influences apparent in her work include 1970s mattresses, majolica pottery, blue and white ceramics, as well as Matisse, Klimt and Pollock. Ahkami’s attraction to these sources emerged, in part, from her belief in their connections to Persian-­‐Islamic aesthetics. Her paintings celebrate Persian art’s connectivity and its contributions to global visual culture. However rooted in her dialogues and influences, Ahkami’s art is distinctly her own, and represents her continued quest for a global art that honors Persian-­‐Islamic art as well as Western traditions of individualism and free expression.