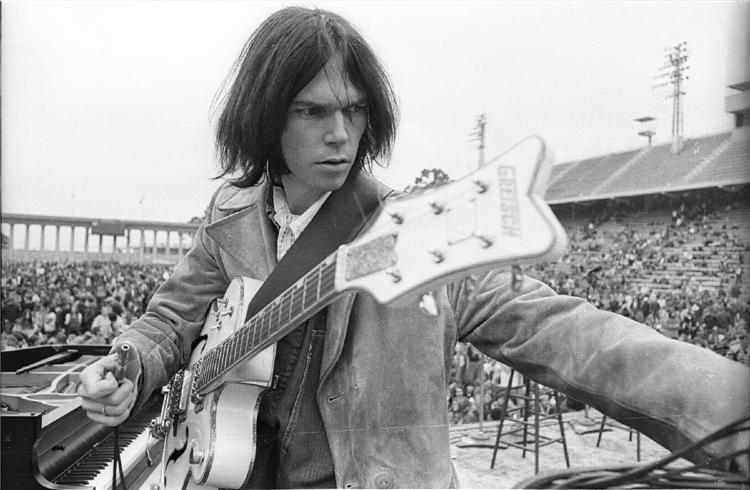 –
Neil Young will release a CD, digital album and a Limited Edition Deluxe Box Set of his recent vinyl album ‘A Letter Home’ on Reprise Records on May 27th. The box set is a beautifully packaged expanded version of the vinyl edition first released on February 21stby Jack White’s Third Man Records. The Limited Edition Deluxe Box Set will also contain a Download card for the hi-res Audiophile version of the album.
Young recorded the collection of covers with White on a refurbished 1947 Voice-O-Graph recording booth at Third Man’s Nashville headquarters. Imagine a very simple recording studio not much larger than a phone booth and you’ll get the idea.  He describes the album as “an unheard collection of rediscovered songs from the past recorded on ancient electro-mechanical technology captures and unleashes the essence of something that could have been gone forever.”  Recorded live to track to one-track, mono, the album has an inherent warm, primitive feel of a vintage Folkways recording,
As for the track-listing, Young chose songs that have personal meaning for him, such as British folk artist Bert Jansch’s “Needle of Death” (which inspired Young to write 1972’s “Needle and the Damage Done”), Bob Dylan’s “Girl from the North Country,” Willie Nelson’s “Crazy,” Don Everly’s”I Wonder If I Care as Much,” Bruce Springsteen’s “My Home Town,” and many others.
The album begins with Neil recording a spoken letter to his late mother, informing her of his personal and present state of affairs which sets the tone and atmosphere for the duration of the album. He does this once again at the beginning of Side 2 in a way which could explain why he’s selected these particular songs to record. In essence, this presentation is, as its title implies, A Letter Home from Neil. This is a deeply personal and expressive listening experience which is as real and raw emotionally as it is sonically and yet light of touch in its form and flow.
Reprise will release the complete box set, which includes a special “direct feed from the booth” audiophile vinyl version and a DVD that captured the original electro-mechanical process, along with comments from the producers and recording engineers.
Click here to pre-order the box set!