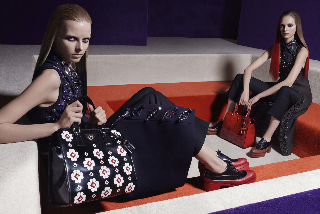 Prada has just released the images for their latest ad campaign featuring their Fall/Winter 2012 collection and shot by Stephen Meisel.  The campaign was shot in New York and features models arranged on various levels of a futuristic, labyrinthine set that mimics that intensity of the colors and patterns in the fall Prada collection. Just as in the runway show, the models sport slicked back locks dip-dyed in vibrant hues and are meant to embody the attitude of a “vitrtual princess.” According to the Prada press release, the eyewear and accessories campaigns, which have yet to be released, will featured superimposed images of models, “as if engaging in a battle across parallel dimensions,” alongside eyewear, accessories, and bags that appear to be larger than life. The campaign is meant to be, “a new take on beauty, a futuristic vision of fantasy and desire.” 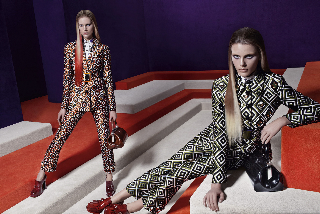