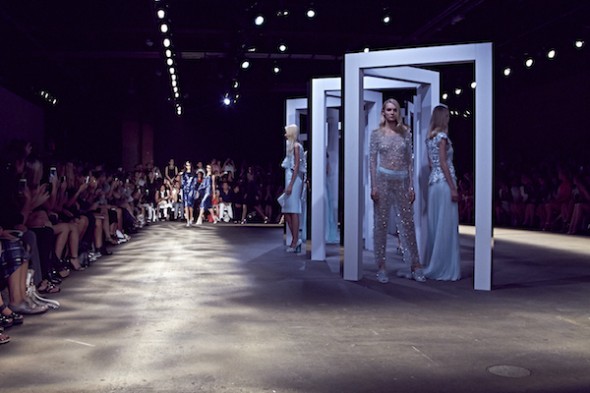 New York Fashion Week Spring/Summer 2015 has once again presented a whirlwind of back-to-back shows and presentations featuring a wide range of looks and styles that never cease to inspire. The Untitled Magazine has picked out thirteen trends from the runways to look out for next season. From pattern and textile trends to over-all themed styles, here is what you’ll need to know before you start working on your spring/summer 2015 wardrobe:

Long, flowy dresses that remind us of wood nymphs and all things mythical are not new to the runway. What is new and was common with this year’s collections, was how designers decided to recreate that “enchanted” look. Most of the lofty gowns that graced the runway for spring/summer 2015 were ethereal and goddess-like. Made with sheer fabrics like chiffon and gauze in pastel colors and with embellished beads and patterns, the unique transparency of the dresses gave the style a more celestial and ultra feminine quality.
–

Another ultra feminine trend we saw in this year’s collections was the return of floral patterns. Flowers of all shapes and sizes covered many of this year’s garments. Digitally printed patterns, embroidered florals and laser-cut designs were found in some of our favorite designer’s collections. Flowers are pretty, delicate, and the ultimate feminine pattern. There’s never too much floral in a girl’s closet, so be sure to include a splash of floral to your wardrobe next spring/summer!

Get ready to pack up your lunch baskets and have a picnic at the park next spring, because it looks like gingham will be everywhere next year. As a fabric, gingham is pretty lightweight, so it’s perfect for all sorts of summer activities. Gingham is a classic summer look and for next season, designers used the checked fabric for a wide variety of garments, from gingham dresses to gingham crop tops and skirts. Brigitte Bardot famously wore a pink gingham dress when she got married, and who can forget Dorothy from the Wizard of Oz in her gingham? The timeless pattern is definitely coming back next season with a fun and contemporary flare!

For a bolder look, go for geometric patterns. Several dresses on the runway had prominent cuts with lines that make kaleidoscopic shapes in vibrant eye-catching colors. Unlike floral and gingham, which bears a softer and subtler statement, these geometric patterns are sharp, abrasive, and absolutely fearless. Designers went for looks made out of bold geometric fabrics, as well as geometric details – such as a Calvin Klein‘s big square pocket skirt.

BACK TO THE FUTURE

Designers like Alexander Wang, Marc by Marc Jacobs, and Shayne Oliver of Hood by Air turned to another era, one that’s filled with boxy silhouettes and over-sized post-apocolyptic looks referencing the future. This trend is defined by futurist fabrics and patterns that are otherworldly. Marc by Marc Jacobs sent down the runway garments that looked too long to be a shirt, but too short to be a dress, which suggests that the future may be less concerned about gender defining silhouettes. Although Wang’s collection wasn’t as gender-neutral as some of the other designers, he incorporated a lot of leather, mesh, and even wove synthetic yarn together to make his pieces look like a Nike Flyknit sneaker, which, inevitably goes hand-in-hand with the futuristic sportswear look.

Mesh ended up being one of the more popular textiles we saw on the runway for next spring / summer.  From futurist and sporty styles, to punk and floral, mesh was incorporated in almost every trend. Notable for its elasticity and easy-to-move-in garments, mesh is both stretchy and lightweight, but also suggestive in a totally revealing way. New York summers can get pretty warm, and because we’re always on-the-go, running and walking from one place to another, we can look forward to wearing mesh next spring/summer.

Coinciding with the monochromatic palate of “the future” is a new profound appreciation of the color white. Not only are we seeing much more white on this year’s runways, we’re also seeing many variations of how we can layer different white garments. From white three-piece suits to mix-matching white pieces made of different fabrics, one of fashion’s most neutral colors will be lightening up every wardrobe.
–

Thanks to the iconic Vivienne Westwood for bringing the sartorial aesthetic of punk culture to mainstream fashion, punks have been a large influence on many of today’s contemporary designers. On the runways, we still saw the some of the eclecticism that surrounds punk style, with ripped sleeves, studs, and leather, although the 21st century play on the beloved style has become a little more reserved and a lot more feminine.

If the second half of the 20th century was all about the miniskirt, and the early-aughts were more or less about the maxi skirt, then what’s to come this spring and summer, is the midi-skirt: a skirt that’s not too short but not too long. It drops below the knee cap, right around mid-calf. If there’s anything clear about next season’s dresses and skirts, it’s that the midi-skirt will definitely be in style. Even more exciting is that these skirts are appropriate for all occassions. Wear it formally like Donna Karan or pair it with a simple tee like Monique Lhuillier for a more casual and edgy approach.  During the day you can pair a midi with flats, and throw on a pair of heels for an easy transition to cocktail.

In contrast to the ultra feminine midi-skirt, the androgynous look of tailored suits were very popular amongst many designers. Sleek, edgy, and absolutely flattering on a woman’s body, these chic suits are great for the urban professional–or any woman who knows how auspicious a good pant-suit is, for that matter. Designers such as Proenza Schoulder matched coat length tailored jackets with leather trousers, while Versus Versace, Vera Wang, and Alexander Wang added a slightly more feminine touch by adding a belted waist to the otherwise masculine look.
–

In addition to tailored suits, we saw military-themed garments found in collections by Marc Jacobs, Rodarte, Yigal Azrouel, and countless more. Unlike the tailoring trend we saw, which had more fitted jackets and suit pants, the military trend means sharp, defined collars over looser button-up coats with a color palate that focuses on khaki, beige and brown. Get ready to hit the trenches in your military look next spring. Designers such as Ralph Lauren and Marc Jacobs mixed it up with sexy styles presenting the look with short or slinky skirts for the provocative militant.

If the cacti hanging around in the background of Mara Hoffman‘s show this year wasn’t a direct enough hint, then the number of designers who showcased a southwestern twist to their collections will. Think: western prints in rustic reds, true blue denim, and all shades of tan. The desert meets Old West combination is definitely an unexpected look. Some of these designers reveled in how they could spice up this idea with floral patterns and billowy garments. One thing is for sure, all of us will want to pull off the modern-day cowgirl look this spring.

Where there are cowgirls in the desert, there is also suede. With suede dresses, suede jackets, and even three-piece suede outfits, more than half the shows at New York Fashion Week featured at least one garment made of suede, making it one of the most popular trends we will see next spring.

NYFW IN THE TIMES OF CORONAVIRUS: WHO’S SHOWING AND WHO’S SKIPPING?