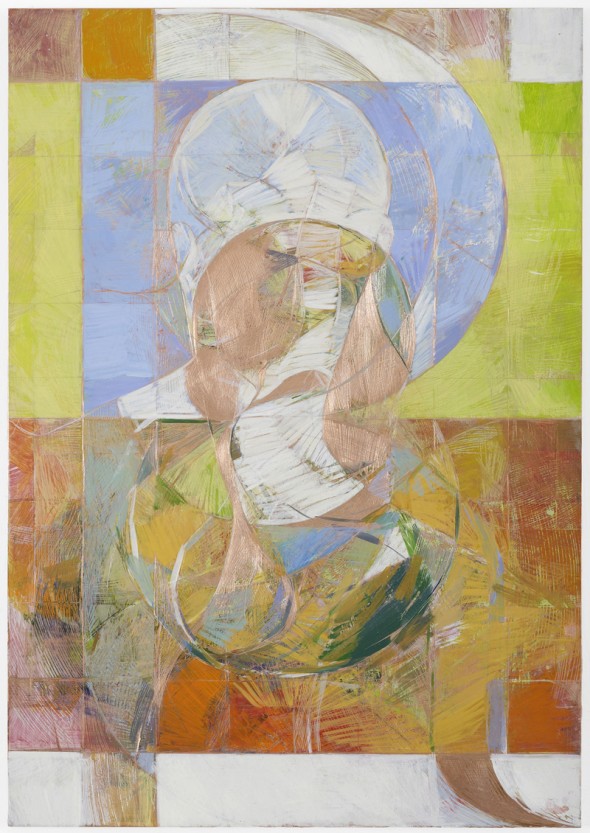 Vilma Gold are pleased to announce a second solo exhibition by British artist Nicholas Byrne. Jonathan Swift’s 1732 Direction to Servants’ is a sarcastic handbook of manners. The book sets out guidelines for servants everywhere on how to maximise opportunities for insolence in the face of their masters. This includes
encouragement to profligate, disrespect and to acquire from below wherever the occasion arises. In doing so it turns customary roles on their heads.

Continuing to employ a specifically corporeal scale, Byrne arranges a suit of small oil paintings between a large-scale triptych and three diptychs, all drawn on copper and linen. The larger works are gestural and evolve out of scurried groups of concertina-like brushstrokes. Orientated as portraits, the smaller works offer a liaison between bustling ground and a repeated Egyptian hieroglyph like head motif that slips through it. Often the surface is shared up with a blade or stylus, invoking a series of mannered provocations between painterly elements. Like heavily mascaraed eyelashes, marks stretch out and retract, feeling their way across surfaces in flirtatious games of display. Where several heads occupy one painting their lines and colours swap between them liberally, complicating the scenario. Figures take turns to be in front. Individual characteristics interchanging, their reading is moved into a space of signs.

As if tuned into the conductive properties of the metal supports, brush marks gather and disperse in the works like iron filings drawn towards a moving charge. There is a sense of choreography to this movement that redistributes the grammar of the paintings, something like a dance. Pictured by Odilon Redon in 1893, the story of Salome might be recalled. It was Salome’s lithe Dance of the Seven Veils after all that seduced King Herod into acquiring the head of Saint John the Baptist. Fittingly, the head was served up on a silver platter.

As regards this investment of energy in an object an aspect of cathexis might be noted. And once the taught skin of the painting is finally broken, – sliced open to reveal a fresh layer of shinier copper beneath, a question of the satisfaction of drives might follow, or of their objectification. In this light the fate of many a 15th C religious icon paintings could be recalled. Objectification of the icon relates to actualization, or to the way the image was required to function. According to convention, it is via direct contact that the beholder correctly addresses the image-as-object. Images of the Sacred Heart for example were dedicated to quantification of the body, and were often pierced or cut as a form of veneration. It was thought that such interventions would activate the picture’s position as stand in. Such paintings became surrogates; willing partners in a game of role-play.

Nicholas Byrne was born in Oldham (1979) and lives and works in London. He has had solo exhibitions at Vilma Gold (2009) and Studio Voltaire, London (2008), and two person exhibitions at Frieze Projects East, Poplar Baths, London (with Anthea Hamilton) 2012, and dépendance, Brussels (with Nora Schultz) in 2011. Recent exhibitions include: One Persons Materialism Is Another Persons Romanticism, Glasgow International (2012); Nobody Can Tell The Why Of It, 1857, Oslo, Norway (2011); Public Private Paintings, Kunstmuseum Ann Zee, Oostende (2010); Newspeak: British Art Now, Saatchi Gallery, London (2010); The Dark Monarch at Tate, St. Ives and Towner Gallery, Eastbourne (2010); and The Long Dark at Kettle’s Yard, Cambridge and Hatton Gallery, Newcastle Upon Tyne, (2010); and Owl Stretching Time, Nordenhake, Berlin (2010).