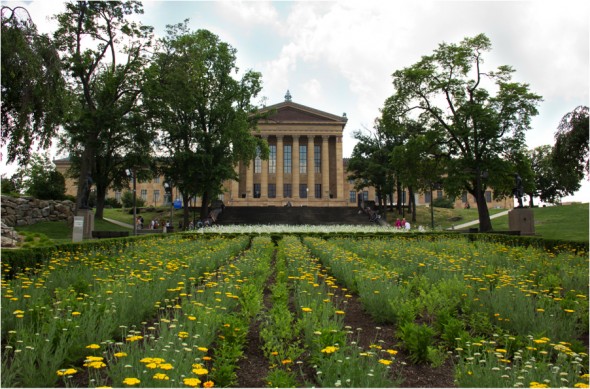 OLIN, a leading landscape architecture, urban design and planning studio, has completed the execution of Sol LeWitt: Lines in Four Directions in Flowers at the Philadelphia Museum of Art. The garden was originally conceived 30 years ago by Sol LeWitt, one of America’s leading contemporary artists, as a site-specific installation in Philadelphia’s Fairmount Park. The work features over 7,000 plantings within four flower beds and in four colors, all in accordance with the artist’s proposal. Lines in Four Directions in Flowers will be on view over the next two years at the site selected by LeWitt, the Reilly Memorial of Fairmount Park along the banks of the Schuylkill River, which is under the promontory of the Philadelphia Museum of Art’s Anne d’Harnoncourt Sculpture Garden.

“It is a privilege and an honor to contribute to the realization of this extraordinary work of art,” notes OLIN partner Susan Weiler. “LeWitt was clearly an intuitive observer of color and nature, and knew what effects he wanted to achieve. It has been a welcome challenge to create a dynamic, living installation from a two-dimensional drawing.”

Sol LeWitt, who died in 2007 at the age of 78, was known primarily for his work with sculpture (which the artist referred to as “structures”) and wall drawings, as well as for a deeply held principle that his designs were to be executed by people other than LeWitt himself. When commissioned by the Fairmount Park Art Association to create a public installation in 1981, LeWitt created the plans for the flower installation at the Reilly Memorial site—the first, and ultimately only, work of this kind in the artist’s oeuvre. Lines in Four Directions in Flowers proposed, “To plant flowers of four different colors (white, yellow, red and blue) in four equal rectangular areas, in rows of four directions (vertical, horizontal, and diagonal left and right) framed by evergreen hedges of about two feet in height. In the winter the rows of plants would retain their linear direction; in the summer the flowers would bloom and the provide color. The type of plant, height, distance apart and planting details would be under the direction of a botanist and the maintenance by a gardener.”

Each of the four beds within the garden measures 4,320 square feet (80’ x 54’), resulting in a lot size totaling 17,280 square feet (nearly one-third the size of a football field). In total, the four colored quadrants contain more than 7,000 plants. Each color palette contains four to five species that bloom sequentially, with the lowest flowers blooming first. This pixelation of heights allows the negative space to be as impactful as the positive space—an extremely important factor to LeWitt. Framed by a Green Mountain Boxwood hedge, flowers within each color palette are as follows (by common plant names):

In order to plan the garden and its floral structure, OLIN studied many of LeWitt’s texts, including the 1969 Sentences on Conceptual Art. To determine the sequence of plants’ within each color range and the natural bloom period of the various flower species, OLIN utilized an algorithmic computer program. According to OLIN, applying the formal rules of an algorithm to this work seemed completely in line with LeWitt’s notion of conceptual art.

The project was implemented by the Philadelphia Museum of Art, in partnership with Philadelphia Parks & Recreation and made possible by a generous grant from The Pew Charitable Trusts.