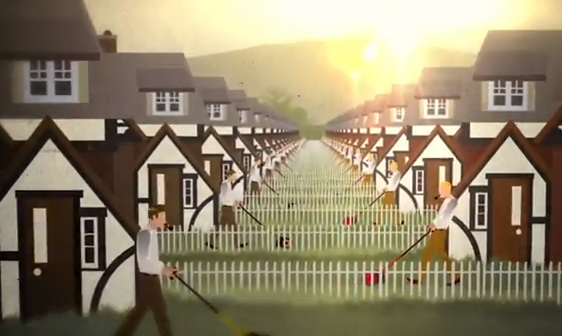 OMD have released the first video from their soon-to-be-released record, English Electric, out April 9 (BMG). The clip is for the album’s first single, “Metroland”. Created by acclaimed animator Garan Rushton and directed by David O’Byrne, the video is a deceptive commentary on the dystopian nature of modern life. OMD’s Andy McCluskey says: “London’s Metropolitan Railway sold a dream ‘Live in Metroland.’ So many people were encouragedto move out of the city center that the open fields they fled to became vastswathes of suburbia. The very act of reaching for Utopia led to its destruction.”

O’Byrne’s Chasing Light is a new company specializing in animation, 3D visualization and video. The video was created in close collaboration with McCluskey and Rushton’s Soup Creative, a Chester, UK-based video and design company. O’Byrne worked closely with McCluskey and Rushton to develop the concept and styling for the video. Traditional 2D animation techniques were combined with the latest 3D and visual effects technology to create the journey from bright optimistic future into a dark dystopian suburbia.

English Electric was written, recorded, produced and mixed by OMD – McCluskey and Paul Humphreys. The record is a 12-track letter to technology, space, love and a grand return to form for a band whose 1980 hit “Enola Gay” occupied the world’s stage at last year’s Olympics Opening Ceremony.

LP Highlights, besides the first single, include the radioactive clatter of “Atomic Ranch” – a songwhich satires conventional aspirations with computerised voices – “Kissing The Machine” – which was composed in collaboration with early influence Kraftwerk member Karl Bartos -and “Helen of Troy” – which revives the recurring historical figure motif.

McCluskey says of the album: “The overarching feel tends to be a sense of loss, of melancholia, that things haven’t turned out the way you wanted them to, whether it be with technology or personal relationships.” The title itself – taken from a British industrial manufacturing company – has further resonance for the pair as locomotive enthusiasts and self-confessed technology geeks.

This is the follow-up to 2010’s History of Modern and the band’s 12th album to date.

The album is being released on standard CD format, as a deluxe edition – with media book and bonus DVD – vinyl format – ltd edition die cut sleeve on heavyweight vinyl, as a limited edition deluxe tin boxset, as well as digitally.

The original four-piece – Andy McCluskey, Paul Humphreys, Malcolm Holmes and Martin Cooper – will be reunited once again this spring for a string of must-see shows, which commemorate the band’s 35th anniversary.

Confirmed tour dates are below. Diamond Rings are supporting OMD on all of these dates except for Mexico.