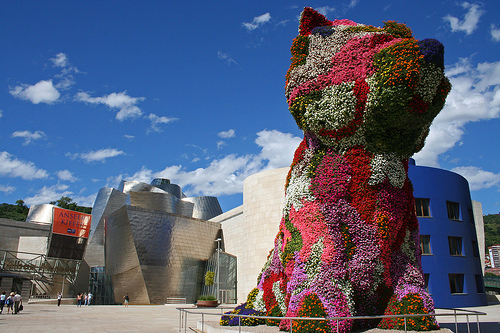 “I’m good enough. I’m smart enough. And doggone it, people like me.” That self-help affirmation, from SNL’s comedic character Stuart Smalley kept echoing through my head, as Jeff Koons addressed last week’s opening night crowd of VIP journalists at his current exhibition the Guggenheim Bilbao. The mantra also seems to fit the Basque Country itself, a region that has been fighting for separation from Spain and asserting its distinction ­­ from its border with France, to a non-Latin based language and culture more akin to Viking origins ­­for decades.

Both Koons and the Basque region were set to seduce us, to convince us it was okay to be an outsider. In both cases, rugged odd individualism has proved profitable. The Basque region ranks first in Spain in per capita income and 40% higher than that of the European Union. And Koons the artist reportedly tallies in at a hundred million in net worth.

“Self acceptance is the journey of my life.” Koons told a handful of us, sitting around him in a back ­­room on black egg chairs­­, like knights of the artist’s roundtable­­. “I’m completely removed from it, when they talk about the money and the prices.”

All of it hints at the dark underbelly of trendy escapism. Following the managable rooms of the Guggenheim, Bilbao made the dialogue between viewer and Koons’ exaggerations feel even more intimate; just at his giant floral puppy at the museum’s entrance points towards a small city filled with ghosts of times past.

At the opera house Abao Olbe across from the museum, visiting Mexican tenor Javier Camarena performed a concert of mostly Spanish folk songs for an vivacious audience that screamed “Mas!” every time the singer exited the front of the orchestra for backstage. Never mind that the average age of those attending seemed to hint at those in their sixth decade, a VIP party continued backstage with copious tapas of tuna, shrimp, ham, cheese, and the signature Basque fish ­­the cod (bacalao) ­­on toasts, plus an open bar.

We witnessed a Jai Alai match, where a Basque and Cuban born contender hit a ball with a wicker racket against a wall at lightning speeds as two other men banged rounded sticks in rhythmic collaboration on the sidelines, a tradition known as Txapalarta (pronounced Cha­la­par­ta).

While the the Basque region itself flourishes in the machine tool, aeronautics, and energy sectors; tourism in Bilbao and surrounding beach destinations like San Sebastian and the fishing village of Getaria, certainly figure into its profitability, especially in the summer months of July and August. One can trek through cobblestone streets of historic Bilbao ­­an area separated by a sprawling picturesque bridge over the Nervion River­­ and contrasts deeply from the silver domes of the modern Guggenheim (designed by architect Frank Gehry). Atop one building, a statue of a man ascends from a stone phoenix, perhaps apt for the Basque spirit and determination to maintain and promote their cultural uniqueness.

The Basques are especially proud of one native son, couturier Cristobal Balenciaga, who introduced silhouettes that ultimately veered away from showcasing the traditional hourglass figure. In Getaria, the guide told us that the young Balenciaga, as a boy, initially learned his craft to help his widowed mother, a seamstress for royalty. Once he’d learned his craft, the designer established exclusive guidelines for those he’d allow to wear the designs.

Not only do the modest Balenciaga galleries manifest his creations­­ from Vionnet inspired Grecian gowns to caplets reminiscent of matadors’ outfits, but they also showcase handwritten invitations and special ash trays used by those permitted to his collection salons, later held in Paris.

An individualist, Balenciaga broke rules by creating the tunic dress and the sack dress in the late 50s so a woman could be both fashionable and comfortable. Maybe this represents what Koons means by “self-acceptance,” putting something out there­­ art, fashion, sport ­­and doing it differently than the masses, until it becomes part of our universal tableau. Every time one of us uttered the phrase “Eskerrik Asko!” Or thank you in Basque­­ as opposed to the familiar Spanish “Gracias” ­­our hosts showed their appreciation with food and toasts of local wine and cider, the latter being especially Basque.

Wanting more than seemingly new age preaching, I asked Koons what spurred him early on, to strive so ambitiously to be recognized. “My sister, who was three years older, could always do everything better than me. So I drew, paint, worked as as a busboy. I had a responsibility to lead.”

“You live to your potential,” he said. “You control your destiny.”

– Article by Susan Kirschbaum for The Untitled Magazine.