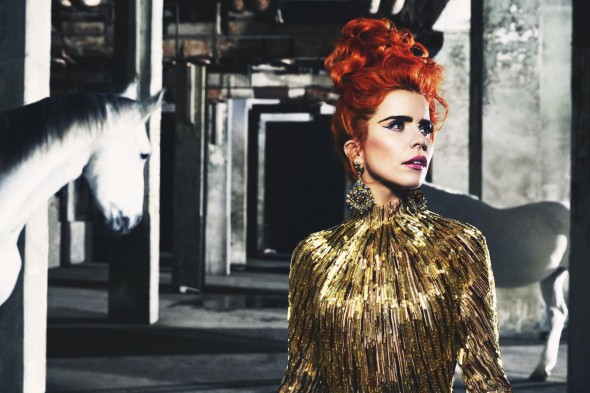 A galvanizing live performer praised for her captivating stage presence and soulful vocal prowess, Paloma Faith promises to deliver an electrifying live experience not to be missed. In addition to performing favorites from her two previous albums, fans can look forward to her bringing down the house with “Only Love Can Hurt Like This,” the stunning new single from A Perfect Contradiction, written by Diane Warren. With more than 6 million VEVO video views, “Only Love Can Hurt Like This” is the biggest hit of Paloma’s career to date, shooting straight to No. 1 in Australia and peaking at No. 6 in the UK, where she performed it at Burberry’s Fall Ready-To-Wear 2014 show at London Fashion Week.

Already a platinum smash in the UK where it’s one of 2014’s top-selling albums and has remained in the Top 10 since its March 10th release, A Perfect Contradiction features collaborations with Pharrell Williams, John Legend and Raphael Saadiq. A Perfect Contradiction marks a change in sound for Paloma, who explains, “Its tone is the very opposite of what the last album was. There are a couple of melancholy moments, sure, but it’s much more a ‘if it’s all gone to shit, fuck it, let’s have a dance’ kind of record.” Indeed, The Observer describes the new album as “a funkier collection of snappy, percussion-led tracks that nod to 70s disco,” while the UK’s Glamour raves, “It’s a perfect mix of upbeat dance and slow soul and her husky vocals are unmistakable.”

Recently named Best British Act at the 2014 Silver Clef Awards and Best UK Solo Artist at the 2014 UK Glamour Awards, Paloma Faith has released two double platinum albums in the UK, 2009’s Do You Want the Truth or Something Beautiful? and 2012’s Fall to Grace. She’s now poised to conquer America with the October 7th release of A Perfect Contradiction, so mark those calendars for the British firecracker’s American adventure!