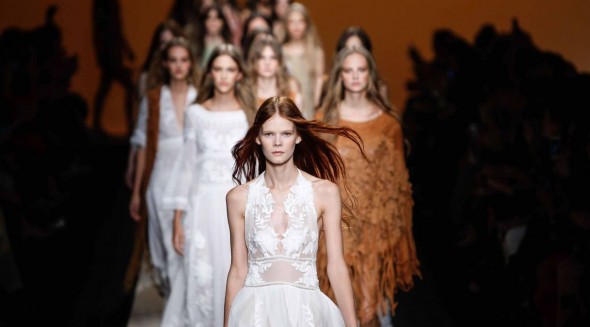 Paris Fashion Week and Milan Fashion Week saw a variety of unique trends and styles for Spring/Summer 2015. The garments were especially memorable, seeing as this year’s round of shows saw the final Jean-Paul Gaultier ready-to-wear collection and the faux feminist protest for Chanel. From long romantic dresses to head-to-toe denim looks, see below for some of our favorite trends that we saw on the runways of Paris and Milan for next spring.

From all the long skirts, high-waisted shorts, floppy hats, and patterns we saw in Paris and Milan, it’s clear next spring will be a revival of 70s fashion. The 70s provided an inundation of fashion innovations and new fabrics – think suede, velvet, chiffon – so it makes sense that we’re still referring back to this period for sartorial inspiration. And how can we forget the fabulous color palate of the 70s? In addition to the aesthetic design of 70s fashion, don’t forget to include some mustard yellows, burnt reds, and sandy browns in your wardrobe for spring 2015! 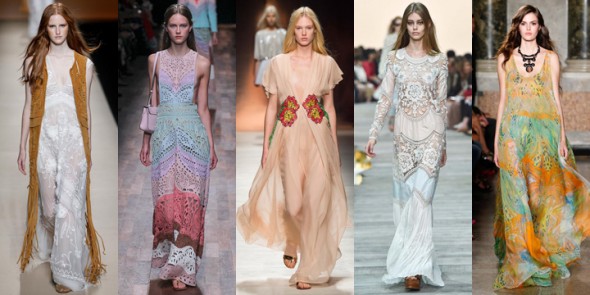 Many long, romantic dresses were also found on the runways of Paris and Milan. Similar to the “enchanted” trend we saw in New York, these floor-length dresses are made with lightweight fabrics like chiffon and gauze, which makes them pretty and also easy-to-wear. The bohemian chic look is highly romantic, and also resonates with 70s fashion (see the suede vest with the fringe that Alberta Ferretti adorned his white bohemian dress with). Be sure to have at least one romantic bohemian dress in your closet next spring! 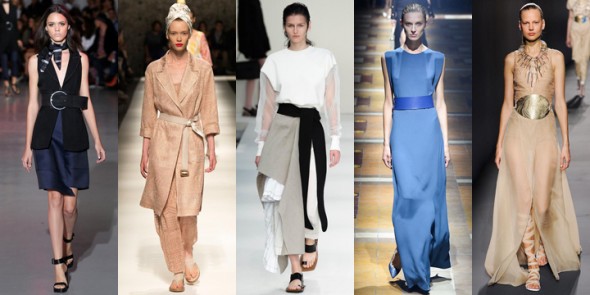 It looks like belts will be the accessory of spring/summer 2015 in Paris and Milan. Unlike traditional belts which buckle in front of the waist, we’re seeing a pool of different types of belts, including one particular look, which is just a wide ribbon tied around your waist. Reminiscent of the Japanese ribbon wrapped around kimonos, designers played with the look by creating metallic belts, thin belts, and long belts that drape over the leg. 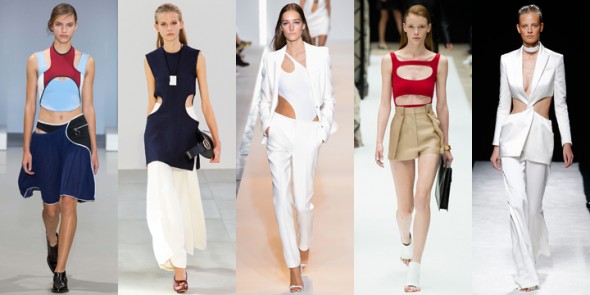 Although there were some cut-out looks seen on Milan runways, this trend was definitely bigger in Paris. Designers like Paco Rabanne and Mugler spiced up their minimalist-designed tops with cut-out circles and oblongs for a look that’s unique and edgy; revealing but classy. The cut-out garments are fun. Although cut-outs can be intimidating in some respect, they’ll definitely add flare to your wardrobe. 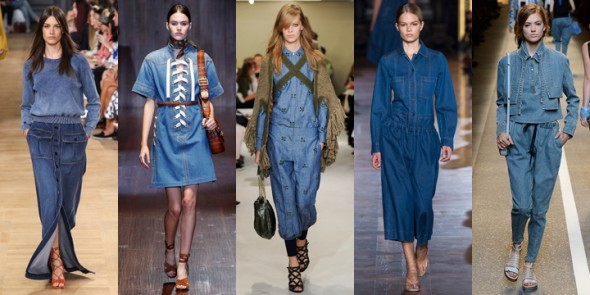 Seeing that denim’s name derives from serge de Nîmes, referring to its birth in the city of Nîmes in the south of France, it wasn’t surprising to see designers returning back to the classic fabric. Not only is denim comfortable, but it can also be sewn to be heavyweight or lightweight, which makes it the perfect fabric for spring. From denim dresses to denim rompers and head-to-toe denim outfits, it looks like the “Canadian tuxedo” will for sure be trending next spring! 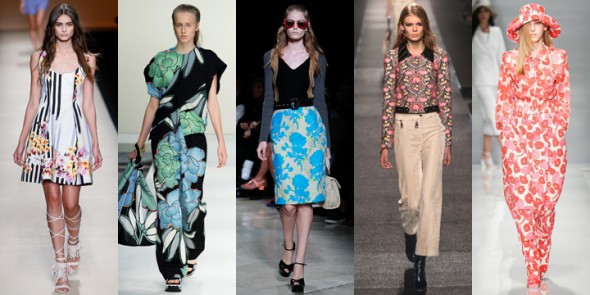 Flowers of all shapes and sizes covered many of this year’s garments, not only in Paris and Milan but also at New York Fashion Week. Flowers are the ultimate feminine pattern. They’re pretty, delicate and eye-catching, so why not splash a bit of floral into your spring wardrobe? Seeing how Max Mara decided to don the pattern — a fearless hat-to-shoe arrangement of the same floral pattern — it’s clear that there can never be too much floral in a girl’s closet. 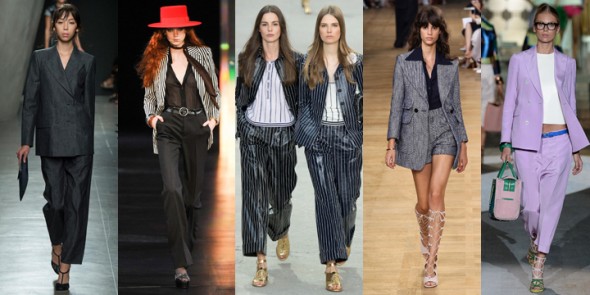 In contrast to the ultra feminine florals, tailored suits were also popular amongst designers in Paris, Milan, and New York. Wear a pin-striped suit with a hat for a classic film noir look or rock a pastel-colored suit — like the one we saw from Dsquared2 in Milan — for something a little more femme. Either way, the tailored suit is the epitome of class and is an essential look for every urban woman. 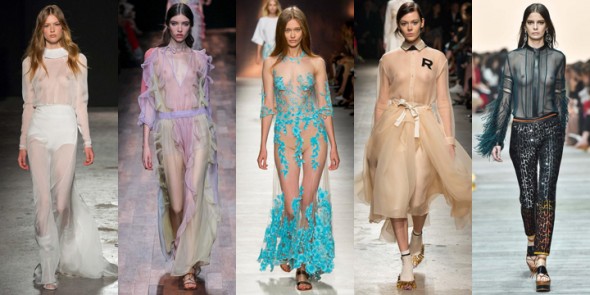 Much like what we’d seen in London Fashion Week, designers in Paris and Milan also withheld all reservations and sent models down the runway in completely see-through garments. 2014 has been the year of questioning female toplessness. Although the models in Paris and Milan were clothed, nipples were still visible, which is a detail we can’t overlook. Switching out opaque fabrics for sheer ones, the “transparent” look is one that is fearless, bold, and wonderfully feminine.