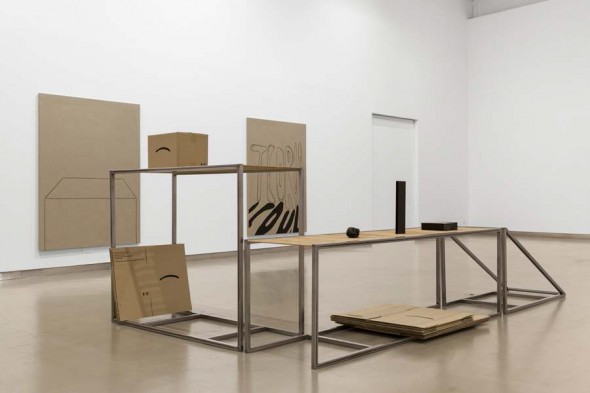 Galeria Filomena Soares presents a solo exhibition of the Portuguese artist Pedro Barateiro (1979, Almada, Portugal), titled Feitiço / Spell, opening on January 17th, thursday, at 9:30 pm, until March 9th, 2013. The exhibition will present a wide range of new works including a series of intervened photographs, sculptures, drawings and even an installation.

The exhibition title comes from Barateiro’s new film made from footage filmed outside and inside the Casa de Vidro (Glass House) in São Paulo (Brazil), built in 1951 by Lina Bo Bardi to be her home. There is footage of theatre scenarios made in the Museu do Teatro (Theatre Museum) in Lisbon and also footage made from photographs taken to one of the São Tomé e Príncipe amateur theatre groups tchiloli. The tchiloli groups, also called tragedies, are amateur theater groups of around 30 people. The crioule word tchiloli is synonym for theatre. The main themes for these plays are betrayal and equality in law. The text Barateiro has written for the film will be said by singers and songwriters Allen Halloween and Lula Pena.

The next artist projects include a participation in the group exhibition Arqueológica at Matadero in Madrid (January 2013), a solo exhibition in the space ARTES, Porto and at Kettle’s Yard, Cambridge, UK, the publication of a monograph about his work and he is the artiste-in-residence of AIRAntwerpen, Antwerp, Belgium.