Performa is dedicated to exploring the critical role of live performance in the history of twentieth century art and to encouraging new directions for the twenty-first century.

Performa 13, the fifth iteration of NYC’s scattered biennial of live-visual art performances is back at it again from November 1st till the 24th. Launched in 2011 as Performa 5, it featured works by James Franco, Shirin Neshat, Liz Magic Laser, and Reggie Watts. Performa, the non-profit multidisciplinary arts organization was first initiated by RoseLee Goldberg in ’04, launching it’s first debut in ’05. Performa’s objectives are simple; commissioning new performance projects in visual arts, presenting dedicated performance biennial, consult and collaborating with art institutions and performing art presenters around the globe to create dynamic and historically significant programs. Performa’s distinct warrant of year-round education programs, all which involve disciplines – constructs new courses of contemporary art and culture, come every other November. 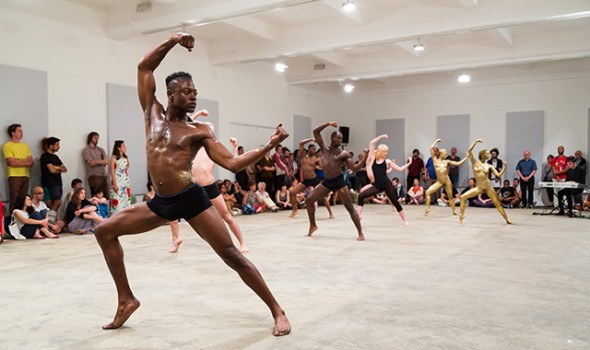 One performance to look for, in my opinion, would be Alexandre Singh’s staging of “The Humans”; a Performa-commissioned play at BAM modeled on the comedies of the poet Aristophanes. Priced at only $20, from November 13-17th.

Performa has received critically acclaimed appraisals, from art admirers far and near. Such prominence has consequently prompted a new trend in museums and exhibitions around the world. Institutions such as MoMa, the Guggenheim, the Whitney, the Centre Pompidou in Paris, and the Garage Center for Contemporary Art in Moscow, have all ascended to the movement. Presenting exhibitions in reply to Performa’s endeavor over the last few years.

In the next three weeks, Performa and an association of art organizations will posse together to display visual art pieces. Transforming our very city into the performance capital of the world. With more than a hundred events presented over forty various venues, it will exhibit its avant-garde program. Impacting on all fields from visual art, music, poetry, dance, fashion, architecture, graphic design, to the culinary arts. Bringing together over fifty art institutions, alongside over fifty curators.

You can plan your visit, here: Performa 13 Date + Times

REPAIR AND REVITALIZE THIS HOLIDAY WITH ESTEE LAUDER + FREE GIFT