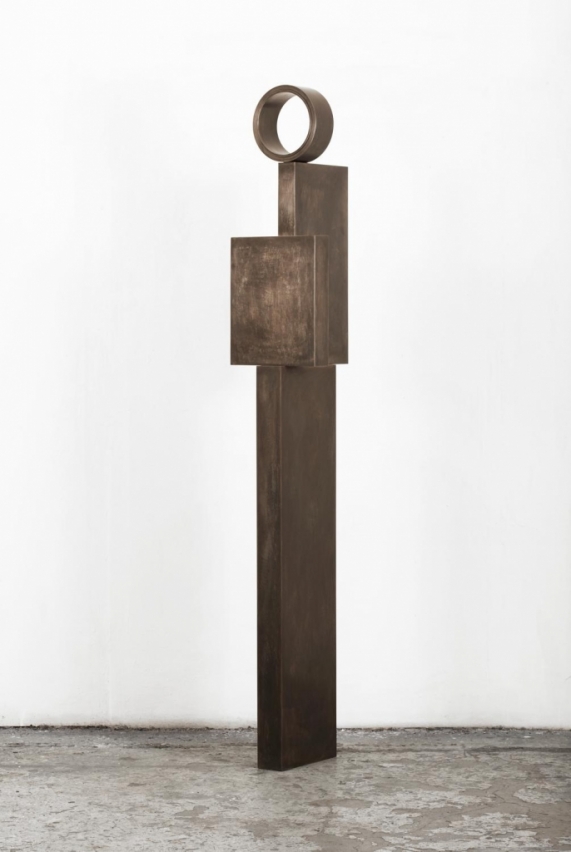 On this occasion, the artist will present a selection of recent drawings, paintings and sculptures. The works in various mediums will be shown throughout the three distinct gallery spaces exploring notions such as empathy, intuition and self-dissolution.

For Peri, these notions can be inherent in the experience of art: his artworks suggest, but never reduce themselves to, an externalised entity, an embodied intelligence that stands in confrontation with the viewer, even when the work is seemingly near-abstract. The nature of this confrontation is cued by various influences that feed into the work, among them the writings of the Russian science-fiction novelist Yvegeny Zamyatin, and a 19th-century illustration purporting to depict the last family on Earth: a cluster of huddled skeletons inhabiting a distant future when the sun has burned out and the Earth frozen over. This image is a phantasmal presence in Peri’s new ‘Skeleton’ paintings, wherein ghostly penumbra appear through the successive layers of the painted image, revealing the paintings’ process and personal histories, imbuing them with tentative life.

The references to modernism that have inhabited Peri’s earlier work here recur – the artist’s grandfather was a constructivist, and Peri’s art, with its dark undertow, regularly establishes a parallel between the shortfall of twentieth-century utopic visions and the erasings within his work. Another salient influence on this work is existential psychology, wherein ideas of dark and blocked space that relate to schizophrenia, a kind of self-dissolving, find echoes in Peri’s paintings, his drawings (some of which relate directly to drawings from psychological research) and his heavily frontal, confrontational sculptures. In Peri’s art, this self-dissolving is recouped, both as a framework for understanding how we might relate to art – as a process of empathy and intuition, a training ground – and also as a way for art to accept the failings of modernism without surrendering geometry and abstraction (or, indeed, in Peri’s painting, the virtues of improvisation). In his recent work, narratives of the modern begin to fall away, and one is left in an articulate state of encounter with a constructed otherness. Speaking of what he finds powerful and moving in historical art, Peri talks of ‘a blank clarity that just tips into self-dissolution’; this is the state his current work pursues.

Born in 1971 in London, England, Peri’s solo exhibitions include; ‘Country 10’, Kunsthalle Basel (2006) and ‘ARTNOW’, Tate Britain (2007). His work has been included in numerous group exhibitions internationally including the Hayward Gallery, London (2006); Kestnergesellschaft, Hannover (2008) ; CCA Andratx, Mallorca (2009) ; The Saatchi Gallery, London (2010) and the Museum of Old and New Art, Hobart, Tasmania (2012). His work is conserved in both public and private collections including Tate Collection, the Victoria & Albert Museum and the Arts Council of Great Britain.