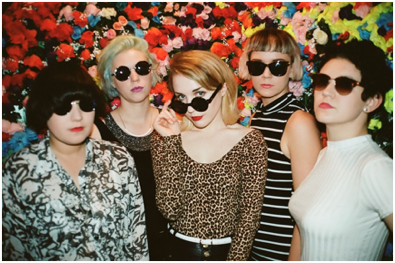 Still on the heels of their successful second album Wild Nights, Manchester five-piece PINS have announced the release of their newest single  and music video—”Got It Bad.”

“Got It Bad” is a standout track on Wild Nights. A love song, but in PINS own style, it is a slow-paced, exposed and honest track that showcases lead singer Faith Vern’s sultry vocals and the tight musicianship of the band. The video clip for the single was shot by Sarah Jenny Johnson in the Northern Quarter and Ancoats districts of the band’s hometown.

This year has seen a packed touring schedule for the band who have kept busy supporting the likes of Sleater-Kinney, Drenge, and Wire, as well as playing celebrated shows with Best Coast, Gang Of Four and Stealing Sheep. PINS has also announced an upcoming headline tour for February in the UK along with their inclusion on SXSW’s 2016 official lineup. Also don’t miss our exclusive with the band in The Untitled Magazine’s #GirlPower Issue – out now. Pick up your copy in our online store or at a retailer near you.

“Got It Bad” can be downloaded for free here.

0
The Untitled Magazine November 24, 2015
No Comments Yet