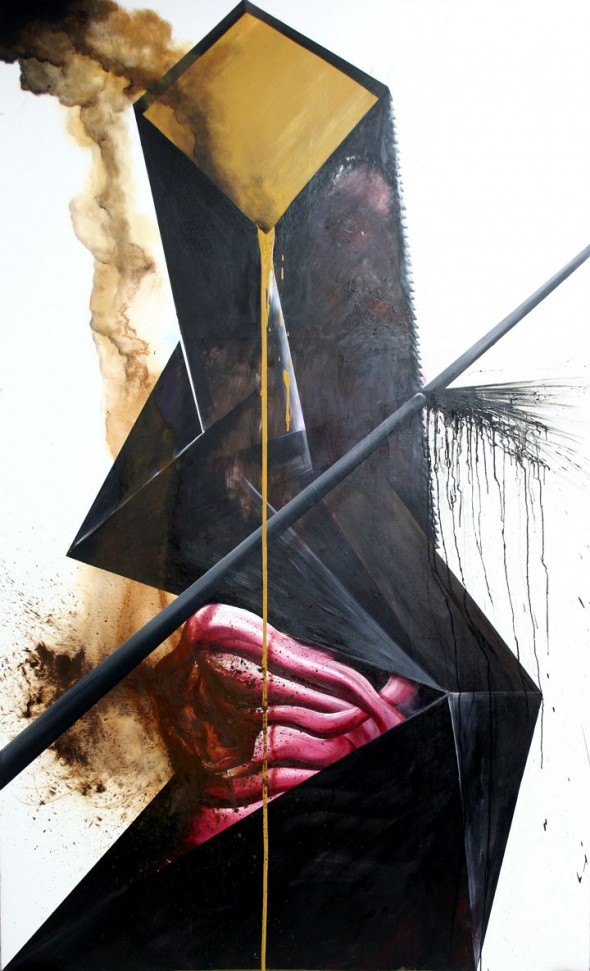 Bortolami Gallery will be exhibiting Minotaurs, an exhibition of new works by Warsaw-based artist Piotr Janas from June 27 to August 30, 2013 with an opening reception for the artist on June 27 from 6 – 8 p.m. Janas’ large-scale paintings straddle the line between the beautiful and the grotesque.

The latest group of nine paintings – which the artist refers to as “figures” or “self-portraits” – addresses the violent actions of scratching, pulling and prodding. Hard-edged, mechanical lines puncture forms that recall organs, bodily fluids, and saclike body parts, which the artist deliberately renders ambiguous. The more violent shapes are painted in exacting brushstrokes of deep purple, magenta, and black, and contrast the backwashes of muted, fleshy pinks. Severe lines slash and stretch the surface of the canvas, creating a sense of depth that simultaneously repulses and attracts the viewer.

Janas’ paintings evoke an imagined world that spans the realms of nightmare and dream, interior and exterior, carnal and cerebral. Citing the Minotaur – one of the earliest instances of bestiality – Janas darkly and ironically refers to the vulnerability of the body and his contradictory feelings of pride and disgust about sexuality and masculinity.

Piotr Janas (b. 1970) currently lives and works in Warsaw. He has had solo gallery exhibitions internationally. In 2012, The Institute of Contemporary Arts mounted his first solo institutional show in London. His work has been included in several group exhibitions including the 50th International Venice Bienniale in 2003, Flash at War with Enigma at Kunsthalle Basel, Infinite Painting: Contemporary Painting and Global Realism, curated by Francesco Bonami at the Villa Manin Centro d’Arte Contemporanea and Polish Painting of the 21st Century at the National Gallery of Art in Warsaw. His work is included in several prestigious public collections such as The Tate Modern, London, UK.