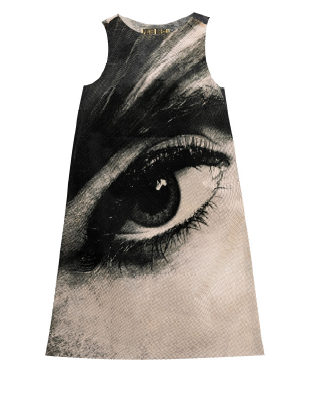 From the poodle skirts and embellished leathers of the rockers, the cool styling of the Mods, the high baroque of Psychedelia and the kitsch glamour of 1970s retro, this exhibition celebrates the time when British popular culture first captivated the world.
In the 1950s a new wave of rock-n-roll and youth culture from America swept the country. The mix of popular images and music with art and fashion would change the way people dressed – blurring the boundaries of commerce, culture and style. Between the optimism of 1955 and the disillusion of Punk, the ‘Pop’ generation created a lifestyle, which reached its apogee in 1966 in ‘Swinging London’, and values which constantly challenged those of wider society.
Head of the Fashion and Textile Museum, Celia Joicey says
‘Pop culture is probably the most significant British phenomenon of the second half of the twentieth century. Design was a primary means of expression for the Pop protagonists and we’re delighted to havesuch a wide range of exhibits, from Britain and America,which show the changes in youth clothing, attitudes and aspirations.’
The exhibition POP! DESIGN • CULTURE • FASHIONshowcases the influence of Pop culture on several design mediums from 1955 to 1976, including record covers and packaging by Pop artists such as Andy Warhol, Peter Blake and Richard Hamilton, and the work of fashion designers like Mary Quant, Vivienne Westwood, John Stephen and Betsey Johnson, design director of the leading New York boutique of the era.
Curator of the Fashion and Textile Museum, Dennis Nothdruft says
‘Exhibition highlightswill include purple flares worn by Donovan, the pop-art fashions of Mary Quant as well as Quant’s early modernist pieces from the original Bazaar, items from Elton John’s personal wardrobe, and original pieces from Westwood and McLaren’s Sex. The exhibition will provide new insight into twenty years of popular culture from one of the most comprehensive private collections of design and fashion.’
Pop graphics will be explored, from the British psychedelic artwork of Hapshash and the Coloured Coat, and the posters of the American West Coast rock venues in San Francisco, to the work of Martin Sharp for underground magazine OZ. The influence of Heinz Eidelmann’s design for the Beatles film Yellow Submarine on late 1960s design will be touched on, as well as the work of ‘Mr Freedom’ fashion designers Pamla Motown and Jim O’Connor, and the early 1970s work of fashion and textile designer Miss Mouse, aka Rae Spence-Cullen.
Throughout, furniture, original posters, graphics and promotional materials will help to set the scene while an “I’m Backing Britain” display will create a dramatic centrepiece.The exhibition will also highlight the casual throwaway nature of much Pop design, from the paper furniture and Union Jack clothing of ‘Swinging London’ to the late 1960s American vogue for paper dresses, to the tin badges, machine-embroidered patches and printed t-shirts of the early 1970s.
POP! DESIGN • CULTURE • FASHIONwill also present the work of ‘Them’, an influential group of Baroque Pop designers who coalesced around Zandra Rhodes in the 1970s, and will end with the anti-design of Punk fashion by Vivienne Westwood and the graphics of Jamie Reid.