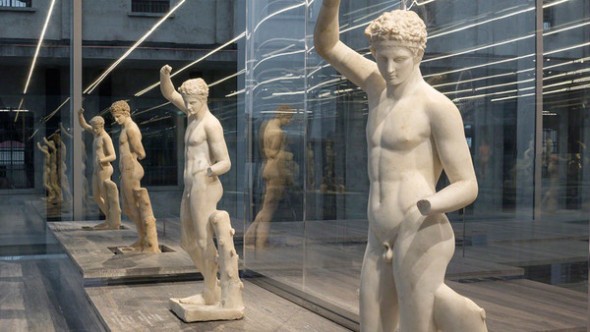 The Prada Foundation opened a new museum May 9th in an abandoned, old distillery in Milan. With the original location in Venice, The Prada Foundation is known for setting up contemporary art exhibits in abandoned warehouses and disused churches. Dutch architect Rem Koolhas designed the 19,000 sq. meter campus of this new Milan location.

The Prada Foundation exhibits a vast collection of art from the 1950s-present. Despite the fact that Milan is the center of fashion and furniture design, this new location is destined to become the new major international destination for the arts. “There’s no museum of contemporary art in Milan and no real dedication from the municipality to promote [such art]”, said Astrid Welter, project director of the Fondazione Prada, “This is why it was seen as a necessity to come in with an offering.”

Seven exhibits are currently set up, which includes one on classical sculpture, as well as an exposition on Polish film maker Roman Polanski. The new location includes a theater for films, live performances & lectures, a center for children, a large library, and will even include an old-fashioned Milanese bar created by Wes Anderson.

The Louis Vuitton Foundation opened an arts center in a similar fashion, which was designed by Frank Gehry for $143 million. Miuccia Prada commented,  “After more than 20 years of staging exhibitions around the world, my husband said he thought it was about time we do something permanent in Milan.”

The Prada Foundation is open 7 days a week, and its general admission is 10 euros ($11). For more information, click here.