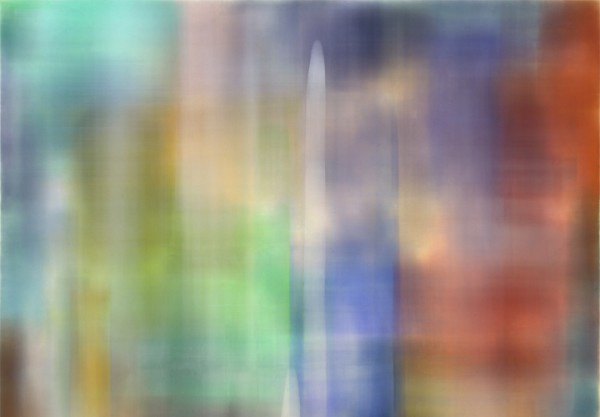 Prudencio Irazabal presents his latest work at the Galería Helga de Alvear. In these new pieces he untiringly pursues his investigation of the deeper layers of painting, which, over the years, has yielded meanings contrary to the materiality of a way of seeing that can be described as “perpendicular to the surface” of the painting. Availing himself of so-called “persistence techniques” —the repeated application of transluscent colours on the same patch of canvas— the artist provokes a revelation of traces made possible only as a result of a long period of time spent on a work. Some of the works exhibited took up to five years to produce.

In his new works, Prudencio Irazabal untiringly pursues his investigation which, through an etymological enquiry coupled with an analysis of the purely physical properties of painting, seeks to understand the painting process as something that is played out not only on the surface but also at the deeper layers of a painting. Such an emphatically material way of seeing has yielded over the years contrasting meanings, so that one could describe this way of seeing as being “perpendicular to the surface” of the canvas.

By using so-called “persistence techniques”—essentially similarly repetitive applications of transluscent colours on one and the same area of the canvas—the artist provokes a revelation of traces that only a long period of time spent on a work can create. Some of the works exhibited took up to five years to produce.

Without minimisng the importance of those aspects of painting which a camera can pick up on and reproduce on screen or on paper, these work procedures create perception zones that the viewer can make out only by standing directly in front of the painting.

Although the inner life of paintings has not received much attention outside museum restauration departments, for Irizabal it weighs heavily in the act of perception. To reveal it or be able to see it without the aid of tools, the artist uses a highly transparent acrylic material. For transparency not only creates depth and forces material to defer to light, but by not requiring study or analysis it functions autonomously before the naked and trusting eye.

These new paintings lend greater protagonism to the underlying layers of the painting and with new formulae solve the problem of integrating more opaque colours among the top layers. Colour reveals itself mainly as a catalyser of light, leaving behind its emotional markers for which, and contrary to common belief, there are no rules. The constants of fluidity and permeability, along with other aspects associated with the multiplicity of spaces, irradation of colour and the absence of a precise focal point, are some of the main arguments that Prudencio Irazabal brings together in the canvases now on display at the Galería Helga de Alvear.