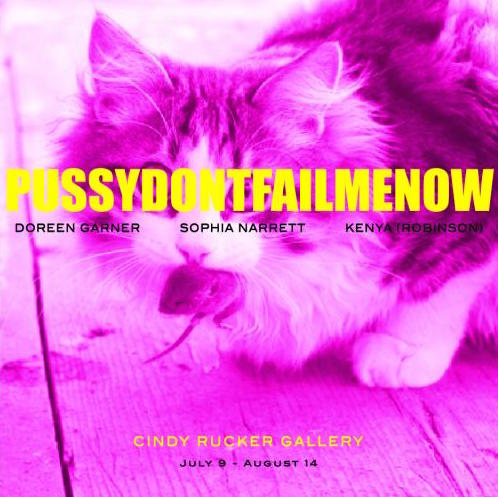 Pussy Don’t Fail Me Now is and exposé of gender inequalities in the art world and real world. While each artist may share interests in the feminist movement, each will bring a personal and unique perspective on gender, anatomy, and sexuality. Doreen Garner, a Philadelphia native, focuses on the history of the Black, female body and its complexities. She sculpts large works of art, primarily using glass, masses of human hair, teeth, and jewels.

Sophia Narrett takes a different artistic approach to femininity, by challenging misogynistic views often found in television and media today, with her intricate embroidery designs. The Concord artist’s pieces, often depict highly sexualized heroines surrounded by forests of flowers and swooning at the sight of one another.

Originally from Germany, Kenya (Robinson) provokes conversation about gender and power through her artwork. The artist has taken part in an extensive project, where she carries a white, male figurine in her pocket wherever she goes. The figurine, which is also a focal point in her work, serves as a reminder that privilege is only a made up concept.

Although their work may not convey the same message, the 3 female artists seem to stand for the same ideal of being proud to be a woman and expressing that appreciation through art.