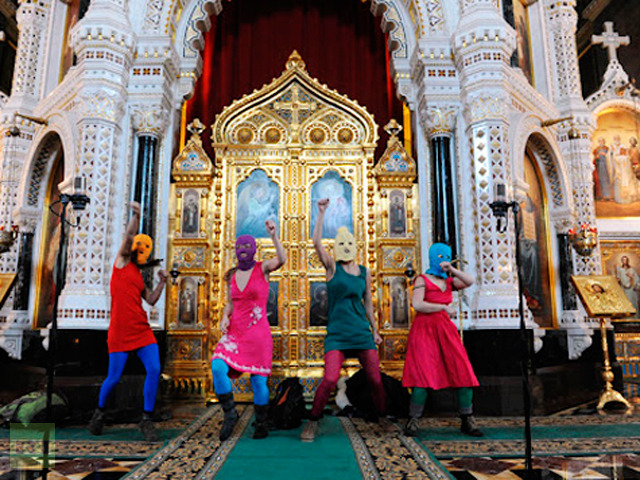 On February 21st, 2012, five members of the Russian girl group Pussy Riot staged a performance on the soleas of a church in Moscow. Their performance was stopped by church security but their “riot” had already been turned into a music video entitled “Punk Prayer – Mother of God, Chase Putin Away!” The following month, two of the group’s members were arrested and charged with “hooliganism”. A third member was arrested shortly after. They were denied bail and held in custody until their trial began in July. On August 17th, 2012, the three women were convicted of “hooliganism motivated by religious hatred” and were each given a two-year prison sentence. Two other members of the group, who avoided arrest, reportedly left Russia completely, fearing prosecution.

On October 10th, 2012, one of the women – Yekaterina Samutsevich – was freed on probation. The sentences of the other two women were upheld and later in the month, they were sent to separate prisons. The trial and sentence of the women attracted the attention of human rights group Amnesty International as well as musicians such as Madonna, Tori Amos, Courtney Love, Sting, and Yoko Ono. Vladimir Putin, President of Russia, stated that the band had “undermined the moral foundations of the nation” and “got what they asked for”. After having served 21 months of their sentence, Nadezhda Tolokonnikova and Maria Alyokhina were released from prison on December 23rd, 2013 after an amnesty bill was approved.

“We all recognize that the whole amnesty program is a PR move by Putin, likely of course a bit of image clean up prior to the Olympics. Amnesty being ‘granted’ to two women put in prison for a 40 second song performance, who would have been released in a mere couple of months after missing nearly two years with their young children and loved ones is, of course, absurd. Last minute amnesty does not make up for that or the rule of law denied to so many others by the Putin regime and our thoughts are with them today. However, we are so happy that Nadya and Masha are safe, have come through this ordeal healthy and strong, and two young mothers will now be getting to see their children. A very large community of activists and donors around the world have worked hard to help to see that happen. In particular we thank all of you in this community who donated to keep them safe and monitored, supplied and visited, who refused to let this pass quietly and never stopped working for their safety and freedom.”  -Hunter Heaney, Executive Director of The Voice Project