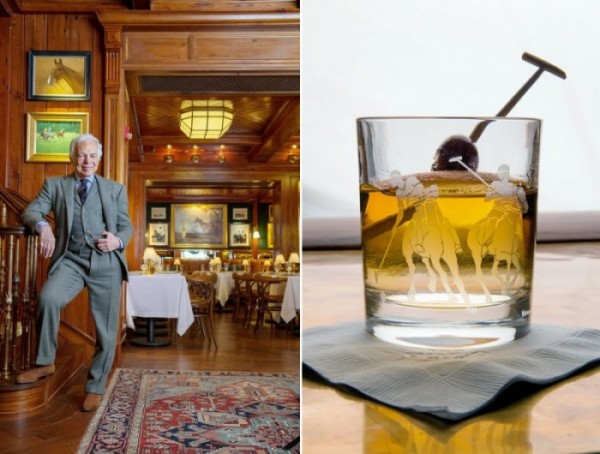 You might trust Ralph Lauren to make a good shirt, but what about a good meal? His new restaurant, called the Polo Bar, opens soon in New York City, just down the street from his flagship store on Fifth Avenue. It has become a trend for stores to open up restaurants under their brand, and successfully at that: ABC Carpet & Home has ABC Kitchen and ABC Cocina; Armani has The Armani Ristorante, which is near the soon-to-open Polo Bar. To some, it sounds gimicky, but really it’s just about turning a vision into reality for Lauren. It is a restaurant not typically seen in New York, which is currently under the craze of modernist cuisine, fusion foods, and the god-like creative direction of fancy chefs.

Ralph Lauren doesn’t want to be an exclusive club, but rather, he wants the Polo Bar to be a place you would want to go to “twice a week” — a sort of neighborhood fixture. The interior of the restaurant is described as “luxurious, elegant, and festooned with Old World flourishes.” Ralph Lauren looks like he fits in perfectly there. In fact, he could have reached the pinnacle of designing clothes, and now he’s continuing to design outward, from his atmosphere to his food.

The food on the menu is specifically selected by Lauren, (and made by Sepp Stoner, a veteran of Arlington Club and David Burke Kitchen.) “You’ve got to be someone who pays attention to the details,” Lauren said. Down to the paintings on the wall and the designs on the glasses. The food is not so very highbrow as you might expect. Corned beef sandwiches, steaks, crab cakes, and yes – burgers. There will be burgers. Lauren has said that a specific burger he had was what inspired him to create his second restaurant, Ralph’s in Paris. His first, RL, is in Chicago. He also has a coffeeshop in New York that opened earlier this year. While all his restaurants want to keep their atmosphere, they aim to be welcoming. There is no set dress code yet for the Polo Bar.

Some may recall that there is another Polo Bar in New York, one situated in the Westbury Hotel. It is inspired by an extreme opulence, featuring Art Deco design with Swarovski Crystal fittings and custom Fendi detailing. It sounds like more of a designer bar than Ralph Lauren’s.

0
The Untitled Magazine December 19, 2014
No Comments Yet