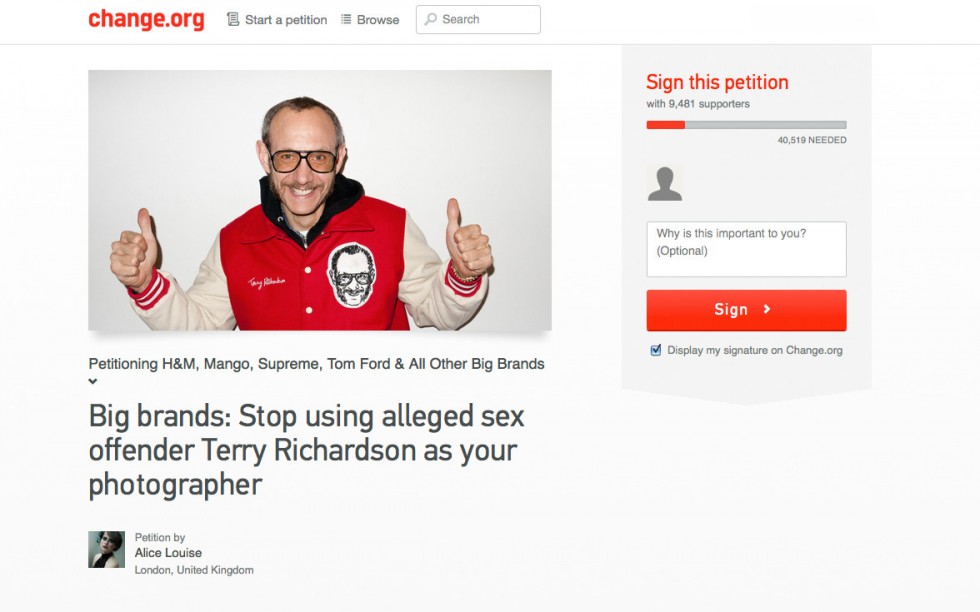 Between the scandalous MTV performance this past August and her full-fledged, yet tastefully acclaimed nudity, in Terry Richardson’s directed music video, Miley Cyrus is just another puppeteer in his series of feats. With “Wrecking Ball’s” adequate lyrics, you would assume the controversy would dimmer upon Cyrus, yet this collaboration set another domino effect within the Richardson scandal diaries.

Who is this Terry Richardson character?

If you haven’t heard about his former misconducts with models in the past nor seen his white-walled, effulgent luminosity he claims as a portfolio, this is one for the books. Not only has he worked with some of the biggest names in the industry (Lady Gaga, Miley Cyrus, Jared Leto, Big Sean, Madonna, Kate Upton, Rihanna, Blake Lively, and even, Obama.), he continues to gain projects daily. His extensive list of impressive clientele does not stop there, as he has done works with the likes of Harper’s Bazaar, Vogue, Valentino, YSL, and H&M, just to name a few.

This controversial figure in the fashion world has been scrutinized in the past with little to no burn upon his conscience. His work has been deemed misogynistic and exploitative, yet much of his finances are mounting up, rather than decreasing. Richardson has been accused of being a serial sexual predator who uses his position of power to coerce young models into performing sex acts with/on him. Here’s a quick lift into Jamie Peck’s re-telling of her experience with Richardson, 4 years ago; Click Here. Bear in mind, this is only one model who grew to fame, willingly to remain loyal to the allegations of sexual misconduct.

There seems to be a reoccurring theme with this man. Not only is he held accountable for numerous accounts of exploitation towards under aged females and inappropriately touching models, the “lambs” within the fashion world seem to consciously support his crusade.

In spite of all this media frenzy, not all women are rallying behind Ehrenfried. On October 14th, Everyday Feminism, promoted the petition via Facebook setting off a series of retorts, in defense and dissent. Here is one quote below of a responder to the thread: “The presumption of innocence obviously doesn’t just apply to fashion, and being the creepy uncle of fashion photography isn’t the same as being a convicted sex offender.”

Now it is up to you, to question of whether everyone’s beloved edgy fashion photographer is a predator behind lens or merely, just a misconceived soul. A facilitator of fun, he declares.