What is the true purpose of a fashion show?  Is it to portray a message to the exclusive audience in the room or should designers tailor their shows for the positive consumption of the web-surfing public in an effort to actually sell clothing?  In our age of  endless “likes” and “dislikes” these queries may prove to be useless.  In the vein of “all publicity is good publicity” it would seem that the biggest shock gets the most social media hits which then translates to the largest profit margin, regardless of the actual clothing (see Kanye West’s sold out sneaker frenzy).  In Paris, Rick Owens’ brought up these questions and more with a show that continues to flood internet media outlets weeks later. His Spring/Summer presentation continued his tradition of using fashion week as a theatrical platform by redefining the phrase “girl-on-girl.”  Inspired by an Annie Leibovitz image of the performance artist Leigh Bowery “birthing” his wife, Owens’ Paris presentation sent several pairs of models down the runway while harnessed together. The collection was titled Cyclops in reference to the one-eyed, mythical creature and symbolizes Owens’ “focused vision” on  “nourishment, sisterhood, motherhood, and regeneration. Women raising women, women becoming women, and women supporting women.” So basically, girl power for the avant-garde. 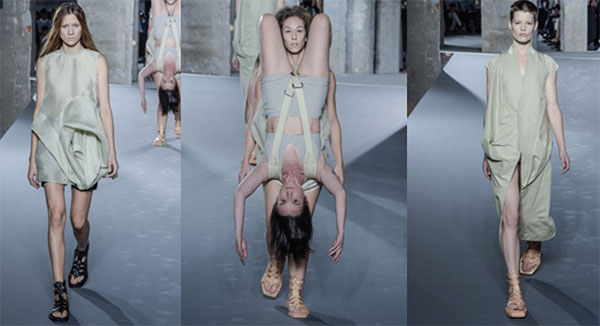 The show’s soundtrack was the voice of singer Eska singing a live version of “This Land” from the movie Exodus.  Models walked past concrete columns reminiscent of a parking garage and glinting with bits of copper metallic that corresponded with the textile embellishment on several of the looks. The collection also included gladiator sandals, the occasional luxe windbreaker jacket, and heavy jutting folds that continued Owen’s admiration of artist Steven Parrino.

In the sparse industrial setting of the show, the listless bodies of the strapped-in women and the stoic expressions of their carriers (gymnasts especially scouted for the task) could be seen as a dark commentary on the heavy burden on the shoulders of females in the world today instead of the optimistic message Owens set out to portray.  Even so, given Owens’ history of highlighting powerful women (see the performance of his SS14 collection) his continuing attempts to focus on feminine strength should be applauded.  However like all enigmatic performance art, the show left itself wide open to interpretation.  As a whole, show-goers reportedly were moved the by the strapped-together models but online reactions were a mix of praise and derision with the common denominator being that the show’s spectacle was talked about much more than the clothing.  We’ll have to wait and see if performance art and social media hits translates into sales for Mr.Owens this season.

Watch the show below.

– Jasmine Williams for The Untitled Magazine