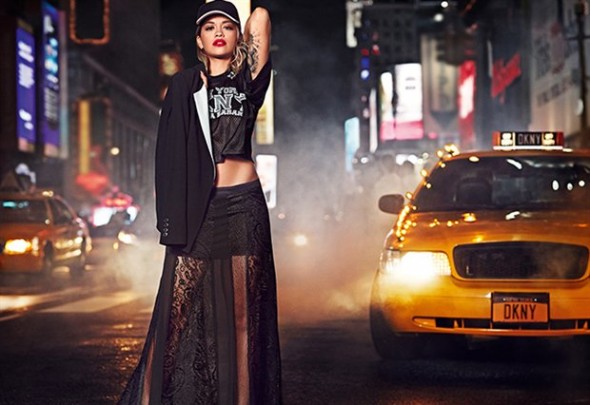 Earlier this year, DKNY announced its partnership with British songstress Rita Ora for their 2014 Resort campaign. Photos from the campaign shot by Lachlan Bailey have been released–and we can see why this was the perfect collaboration.

Ora’s punchy and vibrant aesthetic makes her the go-to girl for DKNY’s outspoken, urban-tinged Resort collection. Her debut studio album, Ora, saw the number-one singles “R.I.P.” featuring rapper Tinie Tempah as well as “How We Do (Party),” a party anthem whose video featured Ora outfitted in many of the subversive neon-pop looks revisited in the Resort campaign. Rita Ora credits singer Gwen Stefani as one of her biggest stylistic and musical inspirations–that influence definitely shines through in all of Ora’s work through to this collaboration with DKNY, from the IDGAF attitude to Stefani’s signature platinum blonde, bright-red-lip look Rita has developed her own reputation for.

New York City provided the perfect backdrop for the shoot in which Ora poses alongside famed yellow cabs in everything from lace and heels to mesh jerseys and sneakers in a fitting continuation of the casual, sporty chic that DKNY achieves with this glamorous but accessible collection. The shots span from day to night, while Rita’s looks appropriately transform from playful and casual to dark and sexy. New Yorkers are known for their love of black clothing and simple silhouettes, looks which are masterfully captured by the campaign, but we do get a peep at the more colorful side of both Ora and the collection as she laughs atop the hood of a yellow cab clad in bright and billowy pinks and purples with blue and yellow accents. Previously, Rita Ora collaborated with Rimmel London for a capsule collection of popping lip and nail shades. Hopefully, her work with these mega-brands signals the beginning of a continuing collaboration between the stunning singer and beauty and fashion.

You can see all shots from the Resort campaign as well as behind the scenes videos and shots here.  View more at dkny.com