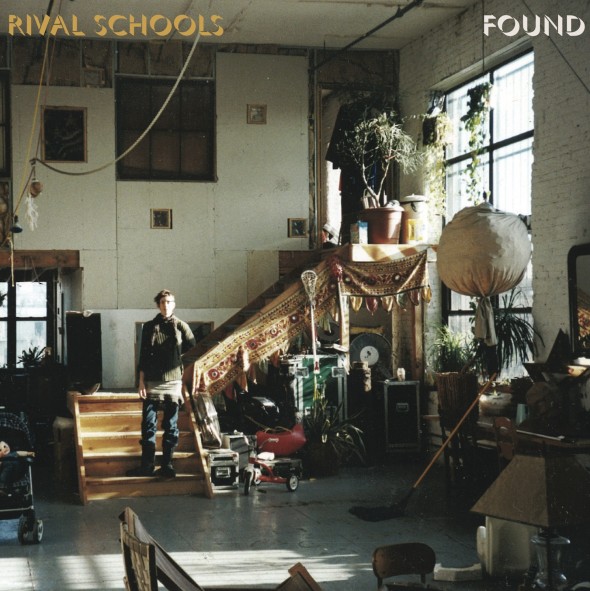 Following the release of their debut LP in 2003, and after two years of extensive touring, guitarist Ian Love parted ways from the New York post-hardcore outfit RIVAL SCHOOLS.  Rival Schools added their longtime friend and musician Chris Taynor to the lineup, and following six months of writing and recording in various studios around New York, bits and pieces of that album leaked on the internet, often being referred to as a “lost album.”  On April 9th, Rival Schools will be officially releasing the remastered “lost album” as Found on United By Fate.  Today they are streaming “INDISPOSABLE HEROES.”

What led up to the Found line up and sessions?

As our touring for United By Fate was winding down Ian Love (our
guitar player) decided to leave the band to pursue a new project so
before we started work on a follow up to United By Fate we reached out
to Chris Traynor whom we all knew from Orange 9mm. Chris is a guitar
maven and a fun guy to hang out with and conveniently has a rehearsal room
set up in the back of his apartment. The photo on the cover of Found
was taken at Chris’s house, the girl in the photo is his girlfriend
Sybil.

What was it like working on the Found material?

It’s a good group of people so we were having fun and the music came
pretty quick and easy. There was definitely a different energy with
Chris in the band but we were open to it. From my perspective it was
nice to create new patterns, we were driving forward without
questioning the material as much as we might have in the past.

Where was the creative inspiration coming from?

On a musical level the inspiration was very much whatever felt good in
the room that day, if it felt good for a week or so it basically had
made the cut. All the material for Found was written, developed and
recorded within a few months whereas United By Fate took years. When
it came time for lyrics I took a similar approach, allowing it to
happen and trying not to judge it too severely. As far as I was
concerned we were recording demos for a second album, figuring I’d
have the opportunity to really dial it in at some future point, I
didn’t sweat the small stuff which was nice.

How did the Found material get lost?

I think it was a combination of factors. For starters we might have
been smart to take a little break between the years of touring for
United By Fate, replacing Ian to writing for a new record, there was a
level of burn out, for me anyways. It didn’t help that in classic
major label form, Island/Def Jam “wasn’t hearing the single” and
wanted us to continue demoing or drop the band. While we still had
the UK label behind us, where we were more popular anyways, the wind
had really left my sails by this time and I wanted out. The silver
lining in it all was that Island gave us the rights to the demos we
had made for them, these are the recordings that make up Found.

How did Found get found?

Although I didn’t see it at the time another bit of good fortune was
that some mischief maker at Island leaked our demos onto the interweb
where they became known as the “lost Rival Schools album” which is why
we decided to call it Found. While I was initially bummed, overtime I
came to appreciate that the fans who managed to get a hold of Found
really seemed to hold it dear. This helped me to reassess the whole
deal. I was able to see Found for the wonderful little musical snapshot that it is.

Found isn’t nearly as polished or developed as United By Fate or Pedals,

it’s a diamond in the rough, a feel good story. “Found was lost but now is found.”