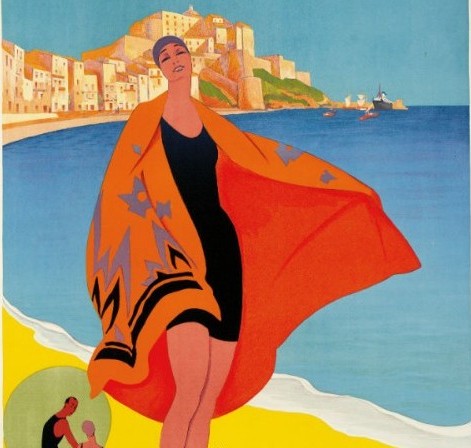 From the English Riviera to the Côte d’Azur, ‘Riviera Style’ celebrates fashion at its most fun. With swimsuits and sarongs, brightly patterned cover-ups, boat neck Bretons and beach pyjamas, playsuits, bikinis and burkinis, the exhibition brings together over 100 years of clothing worn in and by the sea. See how clothing design, fabric and attitudes to modesty have changed over many years, in combination with a social history of holidays.

Exhibition research by guest curator and design historian Dr. Christine Boydell sheds new light on the relationships with swimwear, beachwear and the body. “A key feature of the items selected is the importance of material,” says Dr. Boydell, “from early examples to produce the perfect fabric that didn’t bag or sag when wet, to more recent technical developments designed to improve fit and increase speed in the water.”

Dr. Boydell, whose scholarly research on Horrockses Fashions led to a national resurgence of interest in the brand, identifies the changes in swim- and beachwear as a reflection of the changing mores of society. “Days at the beach began as a health cure when sea air was prescribed by doctors in the Victorian era. Before the 1920s swimming costumes were for bathing: the trend for sunbathing which emerged led to a radical change in the design of swimsuits and beach attire. By the 1930s, men’s and women’s suits had cut away sections and later two-piece models became popular, though many 1940s and 50s swimsuits still had modesty skirts. In the 1940s, swimwear became more like corsetry and a lot of companies, particularly Symington, used the idea of ‘corset-cut’ as a selling point,” states Dr. Boydell.

The exhibition delves into the extensive archives at Leicestershire County Council, private collections, fashion magazine and trade journals for original source material. From Edwardian bathing dresses, which preserved the wearer’s modesty, and knitted swimsuits to barely there Lycra, it’s all here – including the burkini which drew national attention when worn by Nigella Lawson on holiday. There are glamorous swimming costumes worn by beauty queens at the seaside resorts of Britain – and there’s even one off-the-peg Symington’s design which was worn by the winner of Miss Great Britain in 1965. (In a sign of the times, she was presented with her prize by comedians Morecambe and Wise).

Head of the Fashion and Textile Museum, Celia Joicey said, “Thanks to Leicestershire County Council, the UK is guardian to one of the world’s most significant collections of swimwear. We are delighted to be showing these rare examples in London for the first time, and to make them accessible to as many people as possible. In collaboration with Newham College and De Montfort University, we hope the exhibition will illuminate past and present swimwear fashions, and inspire future design directions in the industry.”

The exhibition is organized in five themes:

Bathing became a recreational pastime in the mid-nineteenth century and specialised dress was all about preserving the wearers’ modesty. Resort wear was quite formal and the only difference from ordinary fashion was the use of lighter fabrics often in paler colours. Early swimwear was knitted; men wore one-piece garments designed to cover their chests, while women’s bathing dresses were, in the earlier days, made of serge, cotton or jersey fabric and stockings and hats were essential accessories.

This section looks at the different fabrics which have been used over the years. One of the great challenges to designers of swimwear has been the maintenance of good fit when the suit was dry and wet. The introduction of elastic-based yarns in the 1930s was a real innovation. The period saw top designers including resort wear in their collections.

Mould and control charts how designs moved to more sculpted models, based on corsetry designs. Manufacturers exploited the growing trend for an annual summer holiday creating daywear and beach ensembles in bright colourful prints. Swimwear was essentially a form of underwear worn in public and many of the techniques used in underwear manufacturer were used for swimming costumes, particularly in the 1940s and 1950s.

The period from 1960 to the end of the 1980s was characterised by the shrinking swimsuit. As the amount of fabric decreased and internal support was reduced it became more important for the wearer to improve their physique through exercise and diet.

The end of the twentieth century and beginning of the twenty first have seen the introduction of sophisticated fabric technology which has found its way to the beach via competitive swimming at the highest levels.