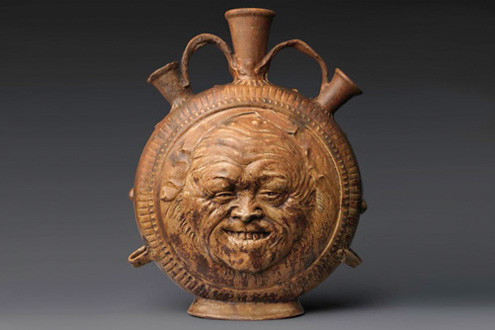 Making Pottery Art: The Robert A. Ellison Jr. Collection of French Ceramics (ca. 1880-1910) celebrates the recent acquisition of Mr. Ellison’s European art pottery collection at The Metropolitan Museum of Art. The majority of the 40 works on display are examples of French pottery and porcelain, and they are shown with comparative examples drawn from the Museum’s holdings of Asian art, European sculpture and decorative arts, Greek and Roman art, and European paintings to illustrate sources of inspiration.

French ceramics from Mr. Ellison’s collection of European art pottery collection include vases made by potters in the years around 1900 that pushed the boundaries of the medium and were technically experimental and aesthetically ambitious. Works by master ceramicists Ernest Chaplet, Auguste Delaherche, Pierre-Adrien Dalpayrat, and Jean Carriès are highlights of the installation. The installation also includes the monumentalVase des Binelles by Hector Guimard (who is most well-known for his Art Nouveau Métro stations throughout Paris) and an extremely rare ceramic vessel by Paul Gauguin, the first by the artist to enter the Metropolitan Museum’s collection.

Determined that pottery vessels should be regarded as true works of art, avant–garde ceramicists in France in the last decades of the 19th century transformed their craft into an intellectual and emotional endeavor. The pioneers of this revival were Jean Carriès, Ernest Chaplet, Théodore Deck, and Auguste Delaherche. These revolutionary artist-potters embraced artisanal traditions while pursuing lost techniques through exhaustive experimentation. Reacting to what they viewed as excessive and improper use of ornament, they celebrated the simplicity and sincerity of their medium, following the tenets of the Art Nouveau style taking place in Europe. Based on the principles of the British Arts and Crafts movement, Art Nouveau artists sought to reform the decorative arts by emphasizing uniqueness and a return to craftsmanship. Artist-potters found inspiration in Asian ceramics, particularly Japanese stoneware (a hard, dense type of pottery), as well as in the forms, glazes, and techniques of Chinese porcelain and pottery. They also looked to European traditions such as the rustic salt-glazed stoneware of the 16th and 17th centuries and Gothic sculpture and architecture. In the process they created works of ceramic art that were entirely modern and new.