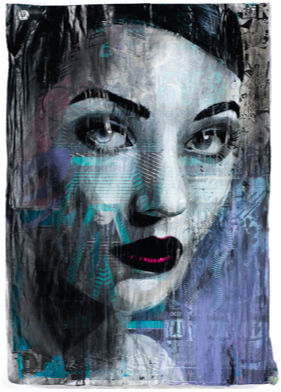 RONE: DARKEST BEFORE THE DAWN

White Walls presents “Darkest Before the Dawn,” the first SF solo show of Melbourne- based artist Rone to follow his successful San Francisco debut in the “Young and Free” showcase of Australian street artists at 941 Geary in 2011. “Darkest Before the Dawn,” will feature works on canvas, brick, and paper, varying in size from 3’x2’ to large-scale works measuring over 6’x6’. The opening reception will be Saturday, September 8th, from 7-11pm, and the exhibition is free and open to the public for viewing through September 29th, 2012.

With the face of the same wide-eyed and sharp-featured woman starring in each portrait, Rone createsa modern legend. Separately, each piece is an autonomous work, existing through its own beauty, but when viewed together a narrative is opened, leaving us to wonder what led to the birth of this icon. In “Darkest Before the Dawn,” Rone tells us that his feature character stands as a symbol for the possibility of assimilating our worst moments into a new strength.

By incorporating a variety of techniques, Rone deliberately infuses each piece with the textures he readily encounters when working out in the streets. The build-up and deconstruction of multiple layers is a fluid, free flowing way of revealing a composition by letting it come about itself. The medley of patterns and textures embody the continuity of time passing, while the woman in the midst of it all personifies grace overcoming deterioration.

“We all have moments in our lives that make us who we are. These may be both tragedies and great moments that change the way we see the world. ‘Darkest Before the Dawn’ explores the concept of our darkest moments will eventually become our strengths, told through stylized portraits of a modern heroine.

I am trying to tell this story with the textures I see on the street, hand painted signage, torn bill posters and the deteriorating walls that look like they could tell their own stories. Using a palette of muted colours inspired by the fading colours I saw in Miami & Cuba, I am trying to create a sense of 80’s when style was all that mattered.”

Rone’s posters are some of the most iconic in Australia, hiding under overpasses throughout Melbourne. He is renowned for the stylised images of ‘girls’ faces – it wouldn’t be a stretch to say that he’s had more posters in his home town’s streets than any other artist in history.

Rone is one of the original members of Everfresh Studios where he still works daily. His ‘girls’ come with him as he travels and now appear on the streets of Los Angeles, New York, London, Tokyo, Barcelona and Hong Kong. Of all the stencil artists from the initial Melbourne stencil boom of the early 2000s, he is the only one still consistently putting his work up.

Rone’s art has been acquisitioned by the National Gallery of Australia, and in 2011 he sold out his first ever solo show in Melbourne before it even opened, highlighting his status as the literal poster boy of Australia’s next crop of street artists.

White Walls Gallery has worked for nearly a decade to exist as the premiere destination for urban art in the Bay Area. Combined with the Shooting Gallery just next door, this 4,000 sq ft space is one of the largest galleries on the west coast. Justin Giarla founded the gallery in 2005 with a commitment to furthering the urban art movement, drawing directly from street art and graffiti culture. Named for its plain white walls, the gallery takes a backseat to the real focus: the work of our artists.