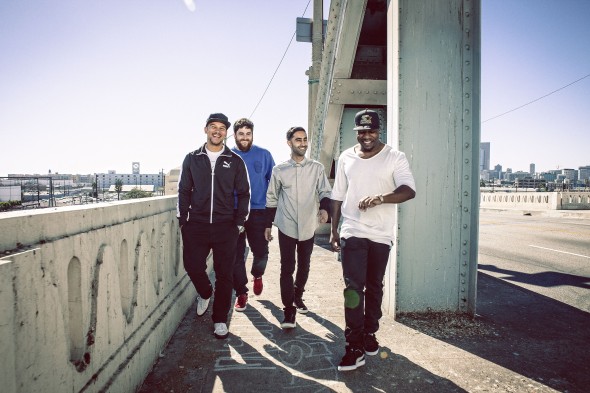 A few years back we caught up with the London four-piece electronic act Rudimental while they were performing in New York. Their unforgettable sound is once again on our minds with their new single “Never Let You Go.” The track comes from their forthcoming sophomore album via Big Beat Records. The new album is a welcome follow-up to their 2013 debut album Home, which sold over 981,000 copies to date. “Never Let You Go” opens with ethereal, choral notes, allowing you a minute to gaze at the stars before the bass drops and it’s time to dance.

Rudimental, composed of Piers Aggett, Kesi Dryden, Amir Amor and Leon Rolle is a musical collective known for the genre-defying eclectic electro sound – although as famous as they get, they can keep us dancing like we’re at an underground drum and bass party. As said by Piers, “Our sound is organic. It’s the result of years of raving, listening to pirate radio, listening to dubs, to tapes older brothers would bring home, and being inspired by all of it. We’re products of our individual musical journeys and of London.”

Don’t miss Rudimental performing their new music live for the first time at New York City’s Governors Ball on June 6 and on June 11 at Bonnaroo 2015 in Manchester, TN. See here for additional tour dates. And don’t miss our exclusive interview with them for The Untitled Magazine.

THE 2015 MET GALA FASHION HIGHLIGHTS AND AFTER PARTIES