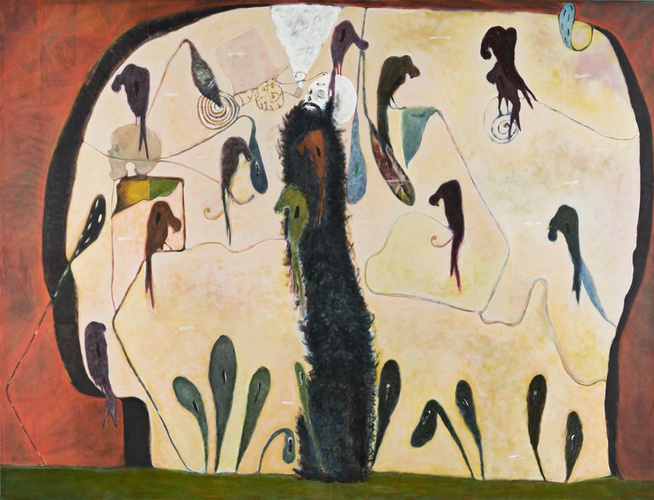 ‘Ryan Mosley is one of the most inventive of the younger English painters at work today, and you can feel the ghostly presence of Picasso here ceaselessly at work… Mosley is a fantasist, a maker of wild, irrational, dancing imagery, who seems to have learnt lessons from every modern movement.’

In Ryan Mosley’s third solo exhibition at Alison Jacques Gallery his narratives within narratives and worlds within worlds feel even more transgressive and irreverent than those we’ve previously been invited to explore. Rich with art-historical devices and painted asides, his vocabulary is now unmistakably Mosleyan, and his characters not only veer well beyond the boundaries of societal norms, but are willing us to get lost with them.

In the large painting, Audubon’s Last Aviary, a skull whose entire torso is constructed from its falling beard conspires with a humanoid spearhead and a vine-stem-face in a yellowing cave. They are surrounded by a flock of abandoned and undiscovered subspecies of bird – hunchbacked and monochrome as if their subterranean existence has made colour, flight and even birdsong distant redundancies. Elsewhere, two courtiers – also with only skulls for faces but resplendent in afros and harlequin-chequered garments – are held in some pre-Quattrocento heraldic pose, carrying boules as orbs and standing within a living coat of arms which is itself part giant skull, part disturbing Botticelli-twin-fantasy. 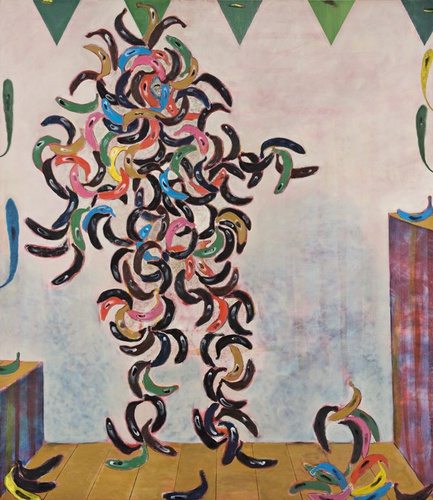 Among the other larger works, a figure within a twilit rural paintscape communes with the faces emerging from the smoke of his pipe, then in turn from one another’s. He seems quite content to be guided, lead and mislead by these smoky profiles, despite their having emanated from him. In The Educationalist a cacophony of colourful bananas have congregated to form the shape of a figure, whose only other features resemble the head of an owlet, suspended in what has become both their classroom and stage.  In the side space, a gathering of ghostly latter-day troubadours seem to eschew conversation, lost in their own whimsies and faraway thoughts before another performance on their travels.

The charlatans and reprobates in the exhibition’s smaller paintings are just as fractured and compelling. Busy Head stares manically like the startled androgynous offspring of a Berserker and Roman Centurion, and the multi-faced moustachioed Duchess of Oils is both camp and macho – as much painterly muse as a formidable, buxom monster. Her transgendered grandeur is matched only by the twin courtiers’ white wigs that diagonally bisect the canvas of Headswill, while Dead Leg provides a humourously chilling reminder of where all this revelry ultimately ends.

Ryan Mosley (b. 1980) graduated from an MA the Royal College of Art and lives & works in London and Sheffield.

0
The Untitled Magazine February 24, 2014
No Comments Yet