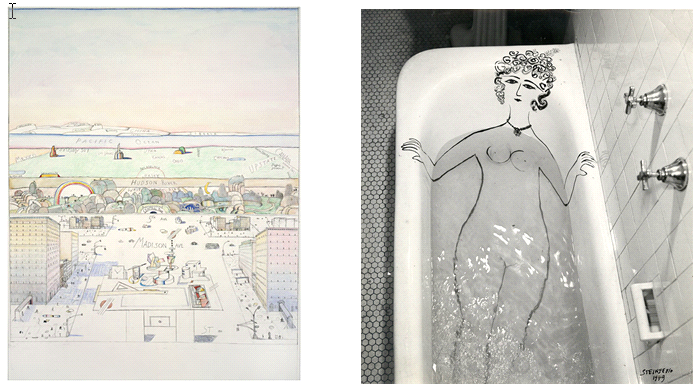 Pace Gallery and Pace/MacGill Gallery will present Saul Steinberg: 100th Anniversary Exhibition in honor of the artist’s centennial. The exhibition will be on view on the second and ninth floors at 32 East 57th Street from September 11 through October 18 and was realized with the cooperation of the Saul Steinberg Foundation. To accompany the exhibition, Pace and Pace/MacGill will publish a catalogue featuring a new essay by Joel Smith, curator of photography at the Morgan Library and Museum and author of Steinberg’s first academic monograph. The public is invited to attend an opening reception on Wednesday, September 10, 6-8 PM.

Widely celebrated for his contributions to The New Yorker, Steinberg was a nimble artist who adapted to whatever medium fit his exploration of the world. The exhibition encompasses five decades of work and covers the breadth of his artistic practice. On the second floor gallery, Pace will exhibit a survey of the artist’s work in different media, while Pace/MacGill will dedicate its presentation on the ninth floor to a focused study of Steinberg’s photographic works in conversation with a selection of drawings. The exhibition will include more than eighty works, featuring some of Steinberg’s most iconic images as well as works that have never been publicly exhibited.

His career attests to a sustained commitment to understand the world at a human scale. Steinberg described his images not as landscapes but “manmade situations,” marking each work with a measure of human invention or scale: people, cars, buildings, pyramids, even rubber stamps. In Untitled (Nine Postcard Landscapes with Figures) (c. 1970s), the artist depicts diminutive figures against landscapes with fabricated stamps standing in for the sun. He sidesteps any attempt at the sublime, presenting landscape imagery as a postcard cliché and a consequence of constant human reinvention. Harold Rosenberg wrote, “the matter of his art is artifice, the way people and things make themselves up, or are made up, to present themselves to the world.”

Although Steinberg produced photographs at various points in his career, his most prolific output occurred in the late 1940s and early 1950s. Steinberg’s photographs—more aptly “hybrid photo-drawings” as Joel Smith wrote—function in two modes: photographs of surfaces on which he has drawn and manipulations atop printed photographs. His additions alter scale and perspective, transforming detritus into bustling urban landscapes and familiar scenes into uncanny grounds for drawing. These works dislocate any assumed objective representational authenticity of the photograph. “A photograph, for all the vaunted uniqueness of its medium, was…just one more piece of paper whose special qualities made it a Steinberg waiting to happen,” wrote Joel Smith.

Steinberg never conformed to a specific movement or art historical moment. He forced his viewers to critically confront not only the content of his images but how they were constructed. Driven by this vision, Steinberg never fit neatly within any historical category yet stands as a canonical figure. Harold Rosenberg wrote that Steinberg “made it impossible for art to acknowledge his legitimacy without changing its conception of itself.”

Concurrent with Pace and Pace/MacGill’s exhibition, Saul Steinberg: Commemorating the 100th Anniversary of His Birth is on view at the Art Institute of Chicago through October 12, which features works from a new, large gift of the artist’s work from the Saul Steinberg Foundation to the museum.

LONDON GRAMMAR TEAMS UP WITH DIOR FOR J'ADORE CAMPAIGN