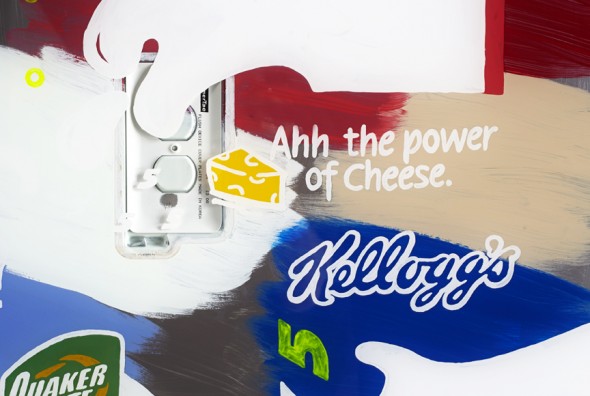 Lid paintings, sandwich paintings, window paintings, decal paintings, container paintings, graphic paintings, layer paintings, improvised paintings – all potential names for the new series of work in this show, but in the end, I think “graphic paintings” is the best shorthand descriptor, as the term “graphic” carries a multitude of meanings. Initially, it would seem to refer specifically to the first of the three layers constituting the work, in which the scaled down graphics of a model race car’s decal sheet have been enlarged and painted onto the backside of a piece of clear acrylic. “Graphic” as an adjective, though, is much less specific and more flexible than “graphic” as a noun. It can refer to an image that is generated by a computer, such as a logo, but it can also more broadly mean a visual representation on a surface, the state of being vividly or clearly described, sexually or violently explicit, etc. The race car motif is a bit of a red herring anyway, as the work is decidedly not about the sport of car racing. What is interesting about the decals is the way in which these ubiquitous signifiers are combined and treated as discreet objects, arranged in an improvisational way within the confines of a rectangle. But, who am I to delimit meaning? I’m sure the work expands upon earlier themes such as framing, the conception of the picture plane, physicality vs. flatness, surface vs. interior, front vs. back, top vs. bottom, background vs. foreground, presentation as representation, etc. In contrast, these works have no fixed orientation and can therefore be hung with any side up, down, left or right. As I said, each piece consists of three distinct layers, which become relatively indistinct from each other upon their superimposition and follow a similar logic of spatial organization. Mostly, the combinations are unrelated, but occasionally, they coalesce to reveal a latent potential meaning. The painterly becomes graphic and the graphic becomes painterly. All of this information is compressed into a flat arrangement that becomes surprisingly embodied as it hovers on a clear plane between the wall and the viewer. What the viewer is to do with it though, I cannot say.

"GET WET" WITH KREWELLA - EXCLUSIVE INTERVIEW

0
The Untitled Magazine September 7, 2013
No Comments Yet