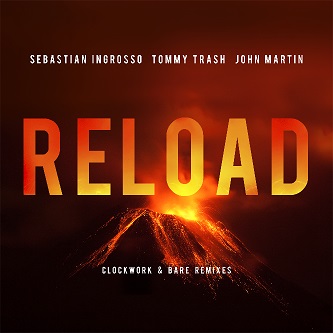 Already a top-5 Billboard Club hit, “Reload” was originally released as an instrumental last year, going straight to number one on Beatport. The updated track featuring vocalist John Martin, (featured on both Swedish House Mafia multiple-million selling singles ‘Save The World’ and ‘Don’t You Worry Child’) has met with huge support at radio and is the latest stellar installment of Ingrosso’s Refune Records.

These two new remixes – set for release October 1st – round out a host of “Reload” goodies including previously released remixes from Carli and Tiedye, the “Reload” Web game, and more (links to content below). Clockwork, a well-respected producer signed to Dim Mak Records known for his bass-heavy, floor-booming style, and fellow LA-based producer and up-and-comer Bare put their individual twists on the anthemic track.

Ingrosso, a tireless DJ and producer – who is also one third of world-dominating, electronic superstars Swedish House Mafia and Refune Records founder/label boss – has also set his sights on electrifying US dancefloors with a series of upcoming North American tour dates this year. Highlights of the tour include Electric Zoo Festival in New York City plus two shows in one day on September 27th(Ingrosso will follow an early appearance at Atlanta’s TomorrowWorld with a late show at Washington DC’s Echostage). He will also headline Live 105’s Spookfest in Oakland.

IN THE VALLEY BELOW RELEASE "PEACHES"