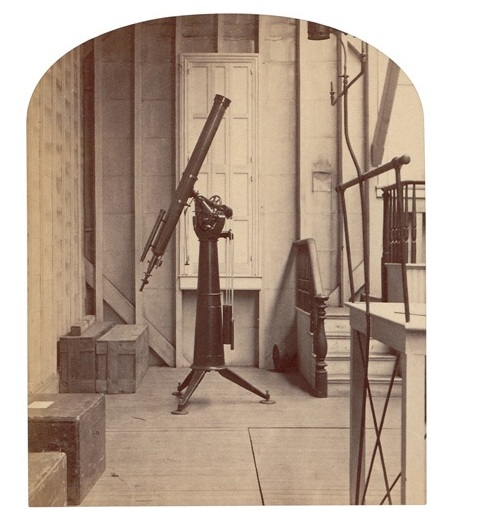 OPEN TO THE PUBLIC SEPTEMBER 6 – OCTOBER 20

Casey Kaplan is pleased to announce Triangulation Station A (40°44’49.17″ N 74°0’22.45″ W), an exhibition by Simon Starling (b. 1967) that draws on two distinct historical narratives. The exhibition, which is Starling’s fifth with the gallery, is based on the idea of the parallax view and runs concurrently with Triangulation Station B (52°31’39.61″ N 13°23’38.64″ E), a presentation of the same works at neugerriemschneider, Berlin. Central to both exhibitions are two films presented separately, each in relation to a sculpture that reinforces the sense of mirroring and triangulation at the heart of their structure. Both films are set within the confines of a small working space in which a craftsman is hard at work, and investigate the relationship between the meaning of making and the making of meaning.

The newly completed film Black Drop (produced in association with Modern Art, Oxford and the Radcliffe Observatory, Oxford), unfolds in a 35mm editing suite as an editor tries to bring structure and understanding to a varied array of material including: footage made on location in Hawaii and Tahiti on the occasion of the June 2012 transit of Venus, archive material, and ultimately footage of himself editing. As the editor cuts and splices the complex narrative unfolds. The film tells the story of the relationship between astronomy, photography and the beginnings of moving image technology. Predicated on the idea that the 2012 transit may be the last to be recorded on celluloid (the next transit will occur in 2117), Black Drop tracks the development of the French astronomer, Jules Janssen’s innovative photographic revolver – a device that was designed to counter human error in timing the crucial moments of Venus’ contact with the edge of the sun, and was influential in the development of Etienne Jules Marey’s photographic rifle and the Lumiére Brother’s cinematograph.The accompanying sculpture Venus Mirrors (05/06/2012, Hawaii & Tahiti Inverted) consists of two large telescope mirrors that represent the 2012 transit of Venus as it was observed in June of this year from two historically significant observational sites in the Pacific Ocean. The small differences in the position of the transit – as observed when the viewer overlays the reflection of one mirror onto the other – were the basis for attempts to calculate the mean earth – sun distance, the astronomical unit.

The second film, Project for a Masquerade (Hiroshima), is a proposition for the performance of a play which collapses Eboshi-ori, the ancient Japanese tale of a young noble boy disguising himself to escape his troubled past, onto the Cold War saga that evolved around Henry Moore’s 1965 sculpture Nuclear Energy. Installed at the University of Chicago, Nuclear Energy marks the birthplace of both the nuclear age and the so-called Manhattan Project, Enrico Fermi’s first self-sustained nuclear reaction – Pile No. 1. Each role in the original Japanese play is taken by one of a new cast, including: James Bond, Anthony Blunt, Colonel Sanders and Joseph Hirshhorn, which was assembled through a web of connections that all lead back to Moore’s monument. The film emerged as part of Starling’s on-going interest in, and redeployment of, Moore’s work which began in Toronto with the making of Infestation Piece (Musselled Moore), 2006-08 (itself a Cold War drama involving rampant Russian molluscs invading the Great Lakes in the dying days of the Soviet Union), but was specifically inspired by the chance discovery of a smaller version of the Chicago monument that somewhat bizarrely ended up in the collection of the Hiroshima City Museum of Contemporary Art under a different name, Atom Piece. Accompanying the film, and commissioned specifically for the twin exhibitions in New York and Berlin, are two wooden masks carved by the master mask maker Yasuo Miichi in Osaka. Standing face to face with each other, they present two sides of the same central character at the heart of Project for a Masquerade (Hiroshima) – Atom Piece and Nuclear Energy.

Simon Starling was born in Epsom, U.K. and lives and works in Copenhagen. A solo exhibition of Starling’s work will be mounted at Tate Britain in 2013.