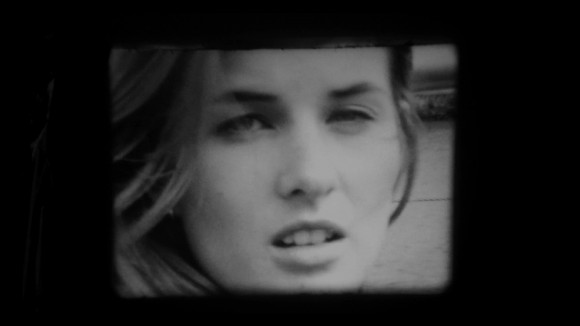 The Helga de Alvear Gallery begins the new exhibition season with US artist Slater Bradley, who returns to Madrid to present his latest work, she was my la jetée, a highly personal version of the cult film La Jetée (1962), by Chris Marker, an indispensable figure in experimental cinema. In this proposal, filmed in Super 8 and HD, Slater Bradley portrays an idealised and inaccessible woman. The exhibition includes a series of photographs showing the same archetype of the woman idealised as portrayed in La Jetée.

On the one hand, Slater Bradley is nodding to the film Rushmore (Wes Anderson, 1998), in which Jason Schwartzman’s character says, “She was my Rushmore”, and on the other to Alfred Hitchcock’s masterpiece Vertigo (1958), in which we hear the protagonist repeat to himself, “She was my vertigo […] She was my la jetée”.

To help understand this interplay of mirrors, Bradley completes the display with a series of photographs of Alina and a double projection entitled Sequoia. In most of the photographs the artist brings out the feminine form of the bodies, maximising this dreamy atmosphere that pervades the exhibition. Bradley has manipulated some of the works in this series both digitally and manually, creasing the silver paper showing the portrayal of his “idealised woman” and creating a relationship of textures, felt tip pen marks and pictorial motifs that reveal a certain fragility in the facial expressions. In contrast, in another series of works, composed of profiles and light-filled golden and colour tones, the strength and character of these women is enhanced.

0
The Untitled Magazine September 19, 2013
No Comments Yet