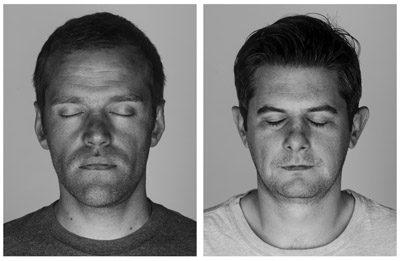 UK duo Stubborn Heart crafts moody, atmospheric electronic music full of broken beats and haunting vocals. Made up of Luca Santucci and Ben Fitzgerald, the band first set ears buzzing with the release of a white label 12” and went on to release their self-titled debut earlier this month. Now, Stubborn Heart returns with their new single, “Better Than This.” Complete with a remix by Graham Massey (founder of 808 State) and a previously unreleased track, the “Better Than This” single is due out April 16th via One Little Indian Records.

With influences ranging from 80’s and 90’s electronic music to 60’s and 70’s soul, Stubborn Heart’s sound displays their appreciation of good pop music, but shows that they’re not afraid to explore the dark side. “Better Than This” is packed with reverberating sound effects and driven by an irregular, thumping beat. The danceable track gets a makeover with the “Better Than This” (Massey Remix), which transforms it into a buzzing, beat-driven cut that pulses with energy. Luca’s airy vocals mingle with shimmering synth to create an eerie tone that lingers.