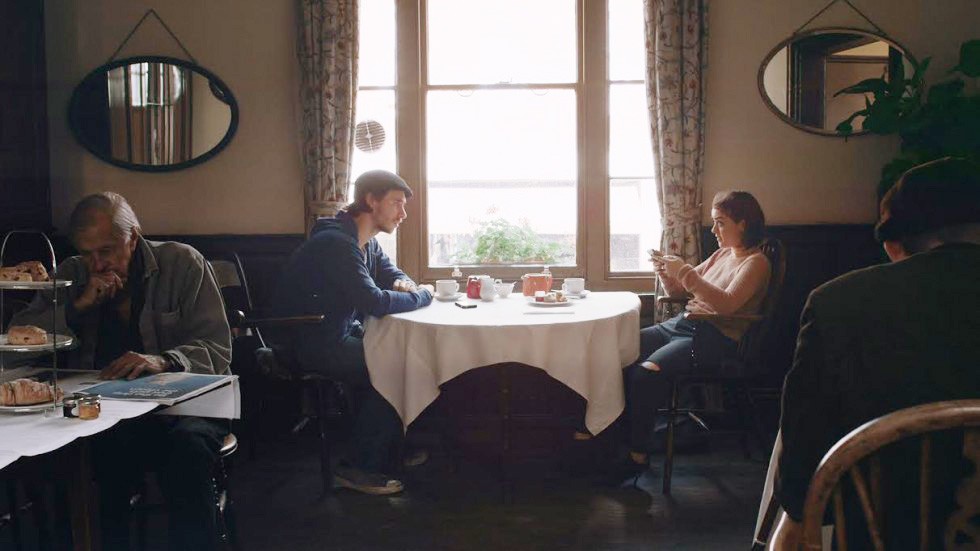 “I take care of my brand! I now have over half a million people following me… What do you come with? A degree?” Biting satire, delivered here by Maisie Williams, sets the tone for a whimsical new web series, Supreme Tweeter. The brain child of Jayne Hong (I Origins, He Has Seen War) and Harry Lloyd (The Theory of Everything, Game of Thrones), this coy episodic comedy explores the notion of online celebrity and social media obsession. For anyone who’s even been beholden to the satisfying ding of a Twitter notification, or the little rush that comes with a new Follower or a Retweet, this one’s for you.

That Supreme Tweeter is also the rare product of a group of big-name creatives coming together to produce something jaw-achingly funny and modernist means that audiences end up with something delightfully dynamic. With the full imaginative licence that comes from pro-bono work and free-range collaboration, Supreme Tweeter uses the lightheartedness of its own genre to tackle an unfettered examination of the role of social media in our daily interactions and our notions of self-worth. Its star-studded cast includes cameos by Maise Williams (Game of Thrones, The Falling,) Tamsin Greig (Shaun of the Dead, Episodes,) Andy Secombe (Star Wars,) and author George R.R. Martin. The result is Supremely Hilarious, and perhaps best of all, free to watch.

Supreme Tweeter follows Harry Lloyd in a mocked-up version of himself, an actor whose waning popularity since the death of his tyrannical character Viserys Targaryen on Game of Thrones (now in its fifth season) has left him astride of the limelight. His search for relevancy across the news feeds of thousands leads him to join Twitter, where he plans a comeback in 140 characters or less. Perched before the incandescent glare of his computer screen, baited by excitement and feeling only a little bit daft as he contemplates a pyjama selfie, a ping notifies Lloyd of his first follower: North Korean leader and Targaryen fanboy, Kim Jong Un. Harry becomes a trending topic and an overnight success with Kim’s influence. His sudden significance is documented in a stuttering selection of scenes brimming with hijinks, yet never veering into slapstick as it critiques contemporary culture in a script both humorous and cringe-worthy.

The Untitled Magazine sat down with Hong, Lloyd, and production designer Jordan Lloyd to discuss their views on celebrity culture and social media obsession, to find out how that affected what went on behind the scenes.

“Celebrity is like a drug,” Jayne Hong points out, over dinner. “Being in the spotlight is all that counts. Some people, once outside of it, will do anything to get it back.”

Jordan Lloyd interjects the Hugoism, “But at what cost?”

“That’s it exactly. One taste of the red carpet, and unless you’re really grounded… you can get lost. It’s scary.”

Lloyd’s performance is relatable for that reason. His struggles with rejection and the addictive properties of attention are universal (even if the experience of being followed by a world leader is not.) As for the real Harry Lloyd, a successful performer who has played stages in Paris and London, and recently appeared in the vulnerable and affecting film The Theory of Everything, it would be easy to assume that success has made him invulnerable. It would also be incorrect.

“Rejection. How do I feel about it? I know it well.” Lloyd assured with an easy laugh. It’s grounding, he thinks. “Then you can be pleasantly surprised when the opposite happens.”

His healthy outlook is interesting, considering his recent run in the one-man show Notes From the Underground, a raw and nihilistic stage adaptation which left its mark in his anti-social haircut in Supreme Tweeter.

“I had this sort of bowl cut for my role in Wolf Hall, which I was growing out into a mess for Notes From the Underground, and I thought– what a good time to play myself in a web series!”

The duo’s excitement for their project comes across, even at the late hour of the interview, both of them famished and having just missed a flight to New York.

Lloyd and Hong co-wrote, directed, and produced Supreme Tweeter. Shot in an eleven day whirlwind, the duo were busy editing footage up until the morning of its release. Each wore a number of new hats: it was Hong’s first time screenwriting, and Lloyd’s first time in production. Long nights were supplemented by kimchi, and an ill-founded venture with fluorescent Post-It notes. Hong was the anchoring force behind the project, holding the ropes and keeping everything in order. “I’d spew out a number of different ideas, and she’d own them, shape them,” Lloyd insists, adding that working in editing and production helps an actor lose the sense of “being at the center of things.”

For him, it’s a refreshing realization, whereas his character’s experience of being at the center of the online universe in Supreme Tweeter is damaging and dementing. The commodification of his celebrity has nothing to do with his own talent or merit.

“There really is a difference between who you say you are online, and who you really are… Social media can provide such an intoxicating connection, it can be easy to forget the platform is also a stage.”

“That’s when the online persona can start to exist offline,” Hong adds; “because of all that positive reinforcement.” Favorites, mentions, and retweets all qualify. ‘You’re Special!’ Harry’s character informs himself, as his number of followers increase. That number can be a powerful stimulant, but the duo wants viewers to remember that the egoism that grows along with it is fragile.

With a Greek chorus of online denizens chanting “will you follow me!” a taste of iambic trimeter in its three-episode arc, and the ultimate fatal flaw of hubris central to its plot, Supreme Tweeter isn’t exactly a Euripidean tragedy (somehow, it’s doubtful that was ever the point,) but it does sink its hands into something gritty. After all, searching co-star Maisie Williams on Google comes up with “Maisie Williams Twitter” before her name or repertoire, and only four letters into the search. It’s a fascinating commentary on the age we live in.

Ultimately, Supreme Tweeter is a fun romp that reserves its judgement even as it shoulders the pros and cons of instant gratification culture it in its narrative. That it does so with humor, gusto, and a bit of a self-deprecating puerility is par for the course. After all, Lloyd points out: “Actors know and dream on things that aren’t real, professionally.”

So he can relate to the draw, even if he’s not shooting a quick Instagram of his dinner.

– Article by Madison Salters for The Untitled Magazine