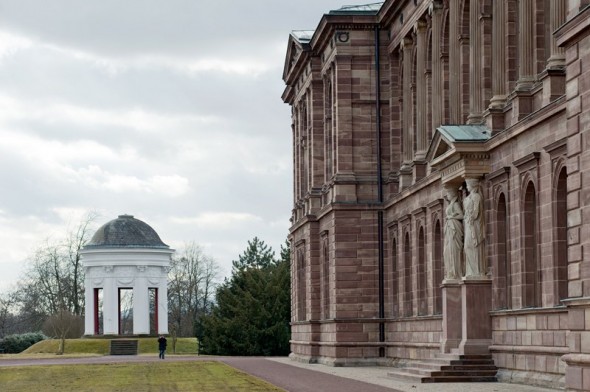 For dOCUMENTA 13 Hiller has devised a sculptural presentation of her personal collection of songs relating to political freedom, and the perennial human desire for justice and peace. Five Wurlitzer jukeboxes situated in different bars or cafes around the town of Kassel, and in a specially created installation in the Neue Galerie, allow members of the public to select songs according to their own interests, preferences, memories, and beliefs.
The songs included range from those inspired by the German Peasants Revolt of 1524-25, the Suffragette movement, the Warsaw Ghetto uprising, the Civil Rights movement, and the recent revolutions in Egypt, Libya and Tunisia. The title Die Gedanken sind frei comes from a sixteenth-century German song celebrating freedom of thought and conscience.
Hiller’s longstanding interest in aural experience and the power of voice to communicate directly on many levels has led the artist to produce this new work which follows on from Monument (1980-81), and The Last Silent Movie (2007-08) in its commitment to the retrieval of lost or obscured historical ‘presences’ or human traces. Hiller’s own magisterial J Street Project (2002-5) is a related work which used silence as chilling accompaniment to the artist’s mapping of Germany’s ghostly Jewish street signs.
Die Gedanken sind frei movingly exploits the historical and spatial particularities of dOCUMENTA: one of the sites used is the Old Railway Station from which Jews were transported to Dachau. As such the work functions as a restless and incomplete archive which is accessible and interactive, using familiarity and ubiquity to propose an ethics of memory.
Quoting from the introduction to Song Book published by Mousse Magazine to accompany the project, Susan Hiller writes:
“These songs are my own box of madeleines and have sparked off many spontaneous moments of recollection, like love songs heard by chance that instantly recreate the scent of a long-ago summer. Whenever I hear one of these songs, a gap opens up in ordinary everyday-ness and a past abruptly emerges. History floods in.
This isn’t history as a linear sequence of events, but as constellations of personal memories and feelings about people, experiences and ideas, some quite recent, some long buried. Some of these songs make me shiver, some of them make me tearful, and some make me happy.
I’m optimistic enough to think that listening to songs that have intersected with my own life might have similar effects on other people.  If so, there could be interesting results, because songs can transmit an idea or an incident or a point of view that’s been forgotten or overlooked, preparing the ground for new ideas to develop and for lost causes to be found again.
We’re living now in an era of anxiety and economic collapse, with no secure solutions in sight. Other eras have been like this, too: some songs my parents and grandparents listened to are having a second life because their concerns are perennial.
Working with these songs reminded me that what’s in the news now is what the news and what the songs have been about for most of my life:  liberation movements, when people reach out and try to grab hold of freedom; unemployment, unfairness, banks crashing, war; peoples’ hopes and demands for justice, peace, and equal rights. Popular music is a counterpoint to the rhythms of contemporary life, an omnipresent, atmospheric condition of public space everywhere, in cafes, shops, nightclubs and buses, from radio, the Internet and various recording and listening devices. Songs can get people talking and thinking. I’m reminded that popular music has been and remains a dangerous art; songwriters and singers are often among the first to be imprisoned or assassinated by repressive governments.”