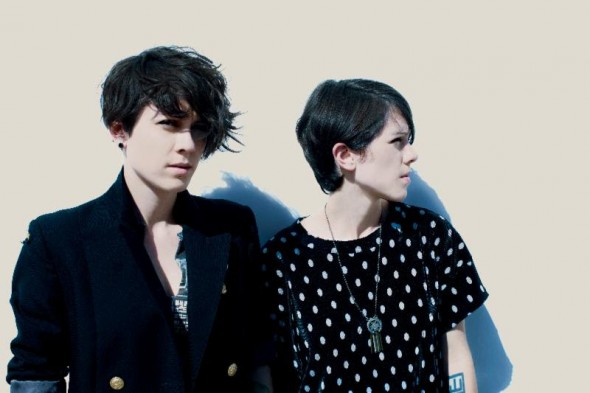 In an all-out popfest announcement, Canadian popsters Tegan and Sara have been officially confirmed to support Katy Perry‘s epic “Prismatic” tour through North America. Kicking off in Vancouver on September 9th 2014 and winding up in New Orleans on October 8th, the Quin sisters will join pop’s leading lady for one of 2014’s most anticipated US tours.

Supporting high profile Top 40 stars is no new task for the Quin sisters, the pair joined forces with fun. for their “Most Nights Summer Tour” in 2013. The Perry/T&S partnership was hinted at when the sisters joined Perry onstage to sing her mega-single “Roar” with Ellie Goulding at the Hollywood Bowl for the “We Can Survive” Benefit Concert in October 2013.

The 34-year-old indie twins have been kicking mainstream goals of late, from the 2013 release of their seventh album Heartthrob – which marked their highest first week charting position of all time and their first crossover single “Closer“. The pair have also made their way into several cinematic endeavours, collaborating with comedy greats The Lonely Island for the upcoming LEGO Movie soundtrack. Tegan & Sara are also joining some seriously indie ranks for the upcoming soundtrack for new new Gabriella Wilde/Alex Pettyfer film Endless Love, alongside NONONO, The Bird and The Bee featuring Matt Berninger, Guards, Echosmith and Tanlines.

In addition to the high-profile dates with Perry, Tegan and Sara will sail with Paramore on the sixth Parahoy cruise, after joining The Flaming Lips, Imagine Dragons, Lauryn Hill and The Fray at Barclays Center as part of Amnesty International’s Bringing Human Rights Home Benefit Concert on February 5th.

– Shannon Connellan for The Untitled Magazine