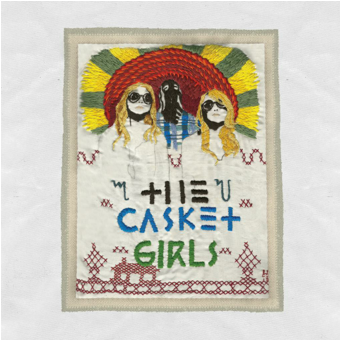 “The Casket Girls” brand of goth pop is definitely dark, but it’s a

perfect mixture of doom and optimism that keeps you hanging on every word.” – Bust

A Sunny Day in Glasgow, Au Revoir Simone, and other dream-pop groups

The Casket Girls are set to release their Self-Titled EP via Graveface Records on Record Store Day (April 20). The EP is the follow up to the band’s debut album Sleepwalking and will be available on vinyl, digitally and cassette. The 12″ vinyl is limited to 500 copies and is beer and mustard swirl with the b-side being a metaphysical etching. The cassette features the band’s debut Sleepwalking on the A-Side while EP is on the B-Side. The tape is available to purchase at the Graveface Records online store

The Casket Girls is a new three-piece band hailing from Savannah, GA. Comprised of Ryan Graveface (Black Moth Super Rainbow, The Marshmallow Ghosts, Dreamend) who wrote and played all the song structures, and newcomers, Elsa and Phaedra Greene, who wrote and performed all of the vocals. The band’s debut album, Sleepwalking, came about rather quickly. Ryan sent Elsa and Phaedra 20+ songs he thought they could add to, and they came back with vocals for 15 of them. He asked TW Walsh (Pedro the Lion, Soft Drugs, Headphones) to throw down some substantial drums to contrast the drum machines he had already recorded, and the album was finished. Sleepwalking, was well received for its dark, poppy & dreamy sensibilities. The album was praised by Bust, NPR, Paste, PopMatters, Spin, The Washington Post and more.

Less than six months after the release of The Casket Girls’ debut album, Sleepwalking, comes a brand new, five-song Self-Titled EP due this Record Store Day. The EP picks up where The Casket Girls left off on Sleepwalking but there’s a sense of urgency that was not there previously. The songs on the EP are perhaps a nod to those that will be on their sophomore album due in late 2013.