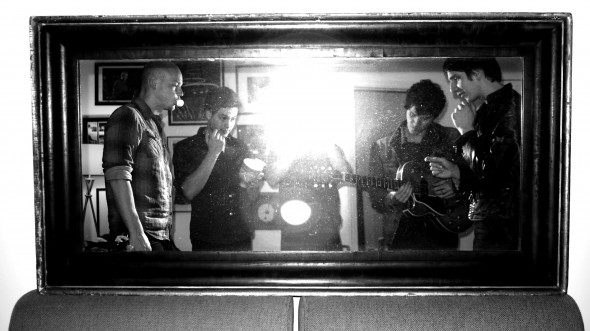 The Dig will be releasing their new EP entitled Tired Hearts on June 4th, 2013 and doing a full US national headlining tour starting in early June and ending at the Knitting Factory in Brooklyn on July 12th.

The Dig‘s sound has been developing ever since the band’s two singers Emile Mosseri and David Baldwin started making music together when they were eleven years old. After meeting California native Erick Eiser, the three songwriters have been writing tunes and playing in different bands since they were 16 years old. Anchored by sharp guitars and a woozy synth backdrop, their last record, Midnight Flowers, produced by Bryce Goggin, came out in 2012 on Buffalo Jump Records. It recalls styles ranging from T. Rex to Brian Eno. Several of the songs off Midnight Flowers have been featured in a variety of TV/Film, including placements in Gossip Girl, Vampire Diaries, For A Good Time Call and most recently a song featured in the season finale of USA’s SUITS.

Following their acclaimed 2010 debut, “Electric Toys,” The Dig amassed a passionate national fan base with magnetic live performances, and have since shared the stage with bands such as Portugal, The Man, The Antlers, and The Walkmen. The band began writing new songs while on the road and between tours. “When we were writing ‘I Already Forgot Everything You Said,'” Baldwin recalls, “we had just gotten off the road and we were listening to a lot of Bob Dylan’s ‘Time Out of Mind.’ I think that influence found its way into that song particularly.” Mark Demiglio (drums) moved to New York from Texas to join the band following the recording of Midnight Flowers.