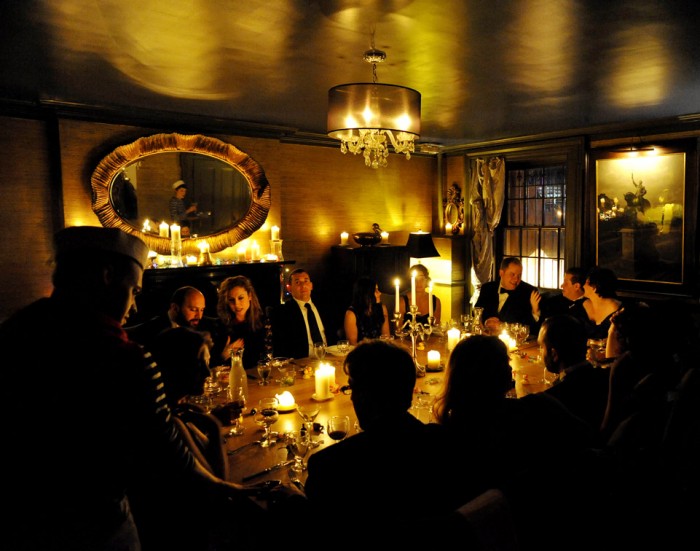 Exclusive Dinner Salons are popping up all over the city. They are often invite only, but sometimes a limited press release is allowed to float around selected circles. This might be the answer to social media communities, where everyone feels pressure to accept anyone as a “friend,” regardless of whether or not they have actually talked to them in person or not. It’s a return to the old Salons of Europe, where a group of people would get together, usually in a regular location, for an evening of intellectual conversation and good food.

America had its own tradition of these intellectual gatherings, most notably in the so-called Gilded Age and the Twenties, with illustrious figures like A’Lelia Walker and Gertrude Stein hosting guests in their own living rooms, creating spaces for discussion and intellectual exchange on a variety of topics.  These Salons embodied and endorsed the ideals and laissez-faire ethos that we commonly associate with “Bohemia”—they were the sites of freely flowing food, spirits, ideas, and sexuality, where whites and Blacks, homosexuals and heterosexuals intermingled, and artists like Marcel Duchamp and William Carlos Williams could discuss new theory and praxis in their respective fields by the fireplace.

The Salon has experienced a comeback in the last decade. Perhaps it is partly as a reaction to the democratization of knowledge that technology has enabled, or because of it, but these events allow participants to experience something that feels novel and unique—exclusive. That said, there is also a very commercial aspect to the more popular Salons that have emerged, and many are open to the public—if you can pay.

Gertrude, an art platform established in 2012 by former Google executive Kenneth Schlenker, hosts Salons which were initially invite-only underground affairs held  at diverse locations announced mere hours before the salon was to take place, ranging from Brooklyn churches and Upper East Side apartments to Google’s offices in Chelsea. The crowd itself was curated—art collectors, critics, and the cultural elite. But this evolved, and as Schlenker stated: “The idea that you need to be an intellectual to appreciate contemporary art is a false one….You need just need to enjoy it… in the right context.”  Now, while Gertrude Salon locations may remain secret until the midnight hour to build excitement, the crowd in attendance is more diverse, and newcomers are welcomed alongside collectors. These Salons act as stages for commerce and culture, sometimes in unequal proportion.

Salons run the gamut in terms of topic and format, and have their own high and low cultural iterations. On one end there is Gertrude and the fluctuations of the art market, and on the other, Queen of the Night and those of its ilk: dinner shows that are purely for entertainment and not even really the food.  While some are still invite-only and force hopefuls to rely on their cultural cachet, the equalizing factor for many remains: currency is still the currency accepted for admission. 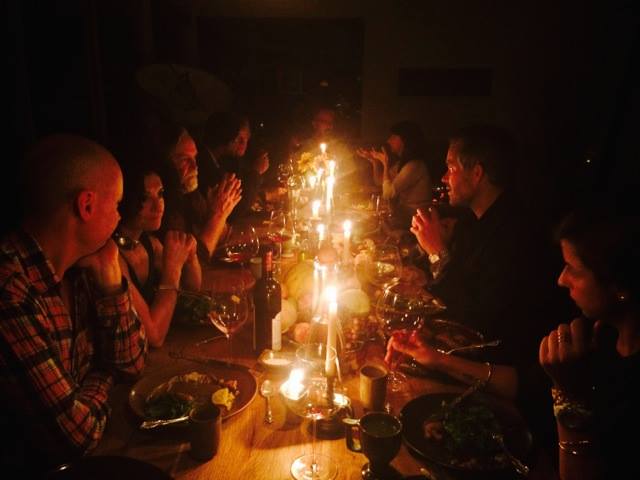 One recent Salon with a more structured thematic focus was the ‘Salon’ dinner party at Pravda, an underground Caviar Bar on Lafayette, which took place on February 25th. “Innovate” was the word of the evening, with hosts Damasa Doyle and Isaac Koren and a select group of invited guests at assigned tables getting together to discuss and exchange ideas. The evening began at 7:30pm with a champagne toast, followed by a specially tailored three course menu, a selection of wines, and conversations from 8:00pm.

These gathering typically draw interesting people from all walks of life. Host Isaac Koren of The Kin is a musician himself, his band having opened for Coldplay. There were six different table topics explored under the umbrella of “Innovate,” where guests were invited to contribute their ideas to hopefully create something new. Topics included Crossroads, Peaceful Activism, Remarkable Women, A Sense of Belonging, Ethical Capital, and The Heart of the Matter.

Different Salons attract different people. A salon dinner hosted last year by Piksel in conjunction with Digital Hollywood, focused on the future of television as a topic. Another recent salon dinner, on February 26 in DC, organized by Leading Authorities, featured the chance to talk with John Pistol, former Deputy Director of the FBI and former Head of the TSA. During his talk, Pistole shared his extensive counterterrorism expertise with guests and provided insider stories and behind-the-scenes insights into what it takes to keep America safe and what businesses can learn along the way. A more public and communal salon dinner is the Diner en Blanc – “New York’s Most Exclusive Picnic.” This is an event that draws people, all dressed in white, who have been waiting until the location is released last-minute. The event is organized by word-of-mouth and a bit of savvy social media, and the event has been known to invite influential bloggers specifically to gain media coverage.

Whether exclusive or commercially minded, the general atmosphere at these salons is often more focused on networking than anything else. If you decide to be adventurous and try one, be prepared for “what do you do” to be the first question you are asked by many you meet.  Sometimes the conversations may be more personal than you feel is appropriate with people you have never met before, while other times it may be enlightening. You never know you may make great new contacts, find a new partner or make new friends. And as long as you are open minded, who knows what scintillating conversation you’ll find yourself having over a mouthful of food?