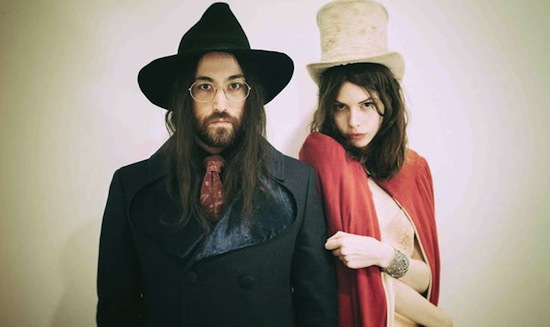 On April 29th, The Ghost of a Saber Tooth Tiger (The GOASTT) will release Midnight Sun, a guided tour of bold, shape-shifting sonic murals and evocative lyrical panoramas, via Chimera Music. Plucking musical ingredients from all over the map, the album has a highly imaginative and distinct feel. It celebrates the unusual and the grandiose but fundamentally just rocks hard and feels good.

Like the hero in the album’s melancholy “Don’t Look Back Orpheus” who takes a journey into a dreamlike underworld, the listener embarks on an auditory voyage of soaring whimsical keyboards and crunching space-age guitars that blends original melodies with kaleidoscopic freak-outs. Midnight Sun injects a surreal landscape with colorful, classic hooks. With an infectious sense of adventure akin to Beck and Flaming Lips, and several years of touring and recording under their belt, The GOASTT takes their creative and savvy approach to psychedelia to new extremes. The ambitious songs flow cleverly together with unexpected ease to tell a vivid and provocative story.

The GOASTT has been busy since their debut. The band toured with The Flaming Lips and Tame Impala, performed at the Hollywood Bowl with Jean-Claude Vannier and released a Record Store Day vinyl EP entitled La Carotte Bleue. Charlotte Kemp-Mulh released an EP with her teenage folk duo Kemp & Eden, who also performed in the film Greetings From Tim Buckley. Sean Lennon, meanwhile, released a record by his experimental duo Mystical Weapons with Deerhoof’s Greg Saunier, a film score to the indie comedy Alter Egos and produced the new album by Yoko Ono Plastic Ono Band.