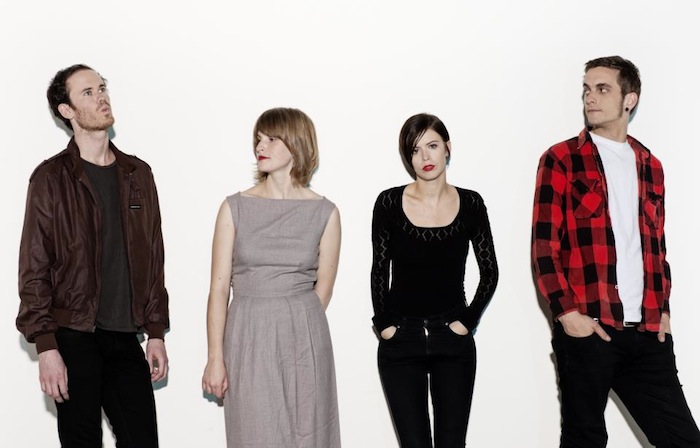 The Jezabels have shared the video for their latest single “Time To Dance.” Directed by Alex Sutherland and showcasing the talents of dancer Emma Hoette, the stunning video was shot from dusk till dawn on a Brooklyn rooftop. The video debuts on the heels of a fifteen date North American tour in support of their sophomore album The Brink which included sold out shows on both coasts and a much buzzed about evening set at Firefly Festival. They also had time to stop into the Apple Store’s SoHo location in New York City for a candid chat about the album, touring life, and their native Australia.

Ask Hayley Mary of The Jezabels what the difference is between complexity and accessibility in pop music, and she doesn’t miss a beat. “There isn’t one,” says The Jezabels frontwoman, “or at least, there doesn’t need to be. To me, pop is the darkest music of all. If you look not at what pop artists are consciously doing but at what they’re reflecting about the world, pop is the most twisted, weird and scary stuff. If you wanted to study the Earth from an alien perspective, listen to pop music.” The Jezabels are arch players of this contradiction. With The Jezabels there’s always a twist and they delight in toying with the darkness that somehow cloaks us all and yet channel it into songs that are layered with bright, chiming seams of pop.

The Brink is their second album and it was summoned from a dark place; despite the outstanding success of their masterful trio of debut EPs and then their first long player, Prisoner, which catapulted them from indie kudos to full blown mainstream success (No.2 album, the Australian Music Prize Best Album award and a staggering, 8 ARIA nominations). The two solid years of international touring played a huge part in forming the abyss that welcomed the band when they pulled into their new base, London, at the end of that marathon cycle of gold, platinum, headline sold-out shows and festivals.

Check out the “Time To Dance” video below: