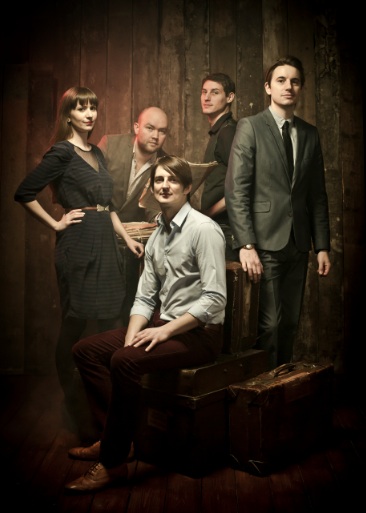 Double Ivor Novello nominees THE LEISURE SOCIETY are to release a brand new album, Alone Aboard The Ark, on April 16 through Full Time Hobby. The new LP – recorded at Kinks frontman Ray Davies‘ Konk Studios – is the follow up to 2011’s lauded Into The Murky Water, which the band toured in ever distinctive fashion, including a date at the London Barbican backed by the 40-piece Heritage Orchestra. The band is planning to make the trip for the first time across the pond to play in America later this year.

Fittingly, Alone Aboard The Ark sees the band expanding their arcadian, Baroque pop sound with a more diverse array of sounds and inventive orchestration. Following a summer of rehearsals beside the River Ouse in Befordshire, The Leisure Society decamped to Konk Studios to begin recording the tracks that would become Alone Aboard The Ark. Having declared himself a fan of THE LEISURE SOCIETY, Kinks frontman Ray Davies (owner of Konk) originally sought out the band to help him arrange and record his new solo material, and also included the band in his curation of 2011’s Meltdown Festival on the South Bank.

The genesis of The Leisure Society spans back to the friendship made by Nick Hemming and Christian Hardy in their hometown of Burton on Trent. When the pair relocated to London they fell in with the Brighton-based Wilkommen Collective, and with Helen Whitaker, Mike Siddell and Sebastian Hankins, came to form The Leisure Society. The single ‘The Last of The Melting Snow’ from their debut LP The Sleeper was nonimated for a 2009 Ivor Novello (alongside heavyweights such as Elbow & The Last Shadow Puppets), and the band joined an incredibly select group when a year later, ‘Save It For Someone Who Cares’ was also nominated for an Ivor.

Lyrically, Alone Aboard The Ark is an album informed by a palette as eclectic as it’s musical flesh. Album standout “The Sober Scent of Paper“ is a hair-raising, elegiac waltz informed somewhat unconsciously by the demise of Sylvia Plath: “When I began writing“ says Nick “I didn’t know what it was going to be about. For some reason, the first line “Chains dredge the great lake around you / Pull you along by the knots in your hair“ made me think of her. I guess it’s quite a dark desolate image“. Yet there’s light to this shade, with “Tearing The Arches Down“ marrying a wryly observed narrative “The boy with the bloodshot eyes / A legend in your lunchtime“ to an ebullient chant.

Having recorded both The Sleeper and 2011’s follow-up Into The Murky Water in home studios, the range of technology both old and new at the band’s disposal at Konk proved to be the perfect foil for The Leisure Society’s ambitious designs. Alone Aboard The Ark was recorded on a 2“ tape machine and a 1970s mixing desk, and the value of recording live, coupled with the band’s minimal approach to arrangement, is borne out across the album. Nick Etwell’s (trumpeter to Mumford & Sons) brass lines permeate “One Man and His Fug“, whilst the electric guitar lines heard on “The Last in A Long Line“ were the product of Christian and Mike‘s two Gretches recorded playing at opposite ends of the studio. Even the piano part for “We Go Together“ underwent a nocturnal reinvention when Christian had ‘a moment of inspiration, whilst deeply drunk at midnight listening to the playback“.

The Leisure Society – Alone Aboard The Ark – Track listing:
1. Another Sunday Psalm
2. A Softer Voice Takes Longer Hearing
3. Fight For Everyone
4. Tearing The Arches Down
5. The Sober Scent Of Paper
6. All I Have Seen
7. Everyone Understands
8. Life Is A Cabriolet
9. One Man And His Fug
10. Forever Shall We Wait
11. We Go Together
12. The Last In A Long Line